Instead of listing down the "13 Rats of Halloween" for this October's festivities I totally could've counted down the "13 Rats of John Waters Movies" because if there's one filmmaker who's gladly aligned himself with this city scourge it's our dear ol' Pope of Puke himself from Baltimore, MD. Whether it's the rats fucking over his title card in Pecker seen above -- and you should listen to John talk about filming that sequence on Seth Myers show, it's very funny...
... or whether it's Donna Dasher (Mary Vivian Pierce)
being terrified of Divine's neighborhood in Female Trouble... 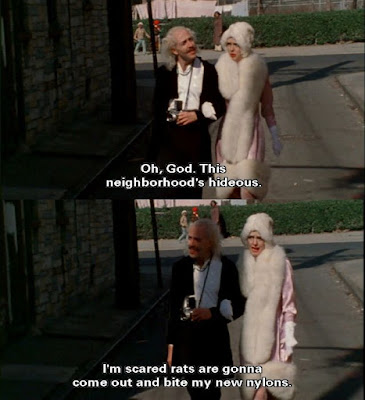 ... John Waters always found a moment or two for the lil' nibblers that could. Indeed as mentioned earlier in this list it was him who introduced me to the film Of Unknown Origin -- he personally screened it here in New York a few years back. But probably the most iconic John Waters Rat Moment comes from his 1977 film Desperate Living... 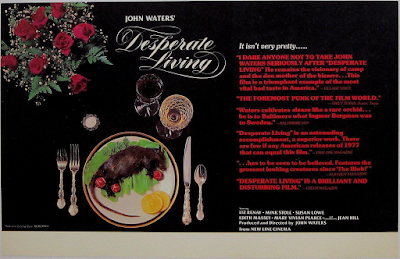 ... which placed a cooked rat on a fancy china plate on both its original poster (which was rejected for print by the New York Times) and in its opening credits. This was obviously a shout-out to the iconic moment in the film What Ever Happened to Baby Jane which we talked about just yesterday, where Bette Davis serves a rat's corpse to Joan Crawford for dinner, much to Joan's horror. But John, being John, takes it all the way and actually shows someone cutting up and eating the rat over those opening credits. Which you can watch right here!
Who? Jason Adams When? 12:00 PM