I'll Make a Mountain Man of You Yet

This is one of those times where I have to, against all of my deeply-seated psychotic horny tendencies, try to rein my enthusiasms in and down and type actual coherent sentences even as every molecule of my body is vibrating at maximum vibrate -- breaths, Jason! Breaths! Okay. I can do this. Weirdly enough nearly exactly one year ago today to the day I told you that a brand new BBC three-part adaptation of Black Narcissus was being made. Rumer Godden's 1939 book about oversexed nuns in the Himalaya Mountains was of course already turned into a masterpiece of a movie by Michael Powell in 1947, but I don't mind them trying again -- it's a fun story and you can get away with more sexiness now! Why not? We'll always have that 1947 film, no matter what happens. 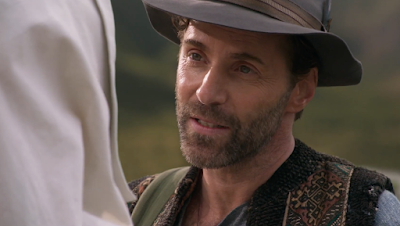 Of course everything I say is suspect and compromised because the makers of this new version went and cast Alessandro Nivola as Mr. Dean, the former British soldier turned short-shorted mountain man who catches the eye of the head nun (here played by the terrific Gemma Arterton) -- y'all know or should know where MNPP has stood on Nivola ever since oh let's say Jurassic Park III -- he's a dino-fighting hairy-chested sweet-song-voiced god-king among men! And so today the trailer for this BBC version has arrived, and...

... you'll understand why I am typing this post rather furiously, with some zeal shooting from my fingertips. I had to stop myself from doing ten laps around my office when the above shot in the trailer popped up! I almost opened my window and screamed hallelujah unto the breeze! 2020 has had many horrors but... this! This makes up for at least a couple of them! Here's the trailer:

So it looks like the BBC has teamed up with the fine folks at FX to release this -- all three episodes will air on FX here in the US on November 23rd (a Thanksgiving miracle!) and then be available to stream on Hulu the very next day. There are other big names in the cast -- you'll see the just passed goddess Diana Rigg in there, not to mention The Nightingale actress Aisling Franciosi in the juicy role of the lipstick-lover Sister Ruth...

The first one was such utter perfection that I'm wondering why they decided to re-do it, but I have to admit I'm looking forward to this

I watch the 1947 film like twice a year. It's one of my faves of all time. I don't think there's anything wrong whatsoever with seeing somebody else tackle the material! If it sucks, we forget it existed. If it doesn't, it will give us a new angle on great material. If it's somewhere in between I will have that shot of Alessandro Nivola in my life! EVERYBODY WINS

Been a fan of BN since I was a little boy. Classic film that I’ve purchased twice on Criterion because Jack Cardiff’s amazing color art/cinematography. My mother went to Catholic school and told us kids a story about a nun that hated her. Her name was Sister Euphemia. David Farrar gave me the realization at a very young age that I was attracted to men. He’s such a man with that voice, his stature, his forcefulness and those long limbs with those short shorts and hairy legs.