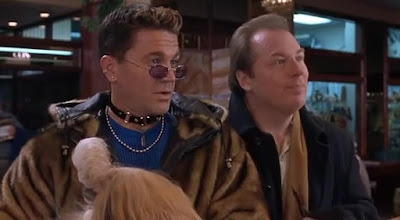 Scott: How tall are you?
Hotel Manager: I'm 6'4".
Stefan: I thought so. I feel
like Alan Ladd at Easter Island.
Scott: Where are you from, like
Nor... Norland? Norway?
Hotel Manager: Uh, I'm Irish-German.
Stefan: Like Robert Duvall in The Godfather.
Scott: Bratwurst and shillelaghs. Paging Dr. Freud.

Happy 20 to Christopher Guest's greatest accomplishment, says me (and I'd know!) -- okay technically there are a couple of dates we could call its 20th anniversary, as Best in Show had its premiere on September 19th 2000, a limited release on September 29th 2000, and then went into wide release on October 20th, but I think it's possible I saw the film during its limited release here in NYC (only a couple of weeks after I'd moved here!) so I'm just gonna go with that one. If y'all want to gauge it by another date start your own blogs!

Okay I need a laugh, and I need one now.
What’s your funniest movie ever made? pic.twitter.com/KPsHbsYpT6

Anyway a couple of months ago I was desperate for laughs (hello, 2020) and tweeted out asking people for their favorite comedies -- I posted about this at the time, I am being redundant. (If you missed it though I recommend click on that tweet above, there are lots of fun recommendations.) But my point is the movie I ended up watching the second it was recommended was Best in Show, because it's probably my favorite straight comedy out there -- nothing makes me forget the world and just laugh myself senseless harder than the antics of these fussy dog lovers.

This movie's so rich that every single time I watch it it's somebody new that jumps out - this time it's John Michael Higgins as that "Proud Mary" and Shih Tzu handler Scott, who's SO RECOGNIZABLE + SPOT-ON for a type of gay we've ALL met and been embarrassed by a dick joke from pic.twitter.com/SS0VD6oa2I

What struck me re-watching BIS for the 100th time this last time was a thing that strikes me every time I re-watch it -- that I always come out of it with a new favorite performance. And yes twas John Michael Higgins who really bit into my funny bone this last go-round. I used to have a bit of a side-eye towards this performance because him and Michael McKean are after all straight men giving really stereotypical camp gay performances... but I guess in my old age I've gotten to a place where I can just appreciate them for being funny. They are both really fucking funny. With the world the way it is sometimes you just gotta cling to funny like a life-raft. 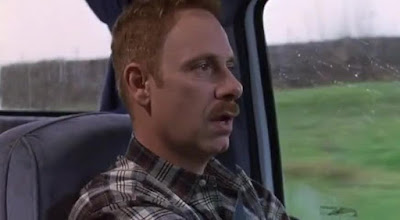 Anyway on another day I'd name Parker Posey, or Jennifer Coolidge, or Catherine O'Hara, as my favorite performances in the film -- just the other day on a Zoom call with some of my best friends we got to quoting Christopher Guest's speech about different kinds of nuts and laughing hysterically. It's a rich film full of perfect shit! What parts do you love? Tell me in the comments!
Who? Jason Adams When? 10:56 AM

Funniest? Minions, Monty Python and the Holy Grail, Bringing Up Baby, A Night at the Opera, Some Like it Hot, The Gold Rush, Steamboat Bill, Jr, The Palm Beach Story, Young Frankenstein, The Bells of St. Trinian's.

I love the outtake where McKean and Higgins meet two dudes named Jack. After they introduce themselves Higgins says something like “...well, we’re a pair of queens. We win.”

My favorite comedies used to include woody allen films but now that’s a bust. The movies I have fond memories of laughing so hard at that I couldn’t breathe: Duck Soup, American Fabulous, This is Spinal Tap, Waiting for Guffman, Napoleon Dynamite, the original To Be or Not to Be, Modern Times, The Naked Gun films, Hopscotch, Young Frankenstein, Some Like it Hot, Big Deal on Madonna Street, Best in Show, Dumb and Dumber, Christmas in July, The Emperor’s New Groove, and The English Patient. Perhaps I have to explain the last one. I was with my husband and a friend. The film was fine for the first half, but then it got ridiculously melodramatic and my husband started to snicker a and sigh impatiently. But when R Fiennes tumbled off the train and started limping back to KS Thomas, it jumped the shark and the three of us started giggling. The music swelled at one point and my husband motioned his hands in the air like a conductor, and the three of us lost it. The fact that everyone else around us were audibly sobbing made it even more difficult to hold in the laughter. I felt so bad as I glanced at the wet eyed faces near us. I could see that we were ruining it for everyone, everyone. But that really drove the humor of it home. All three of us lost complete control. It was completely involuntary. That has never happened to me before or since. But it is a fucking precious memory. And the Seinfeld episode with Elaine getting stuck seeing it twice was a complete vindication for us.

Another unusual funniest movie memory. We had our house on the market in the late 90s. I had not seen Baraka but had a dvd copy that had been given to me. We had an open house that day and I thought it would be cool to have the film showing on our big screen tv during the open house. I just thought it was going to be like a slideshow of beautiful vistas. Well we got home after the event and our agent didn’t say anything to us. The movie was still on, and it was on a jungle visual, lush and beautiful. Turned it off and resumed our day. That night we had some friends over and decided to actually watch the film. And we were shocked and in hysterics as we saw what the film presented us with. Naked villagers and a horrifying chick processing plant. The film is awesome, but any scene with anything gritty or off-putting, we roared with laughter. Ahh, that’s a great memory. We still sold the house btw.

"Leslie and I have an amazing relationship and it's very physical, he still pushes all my buttons. People say 'oh but he's so much older than you' and you know what, I'm the one having to push him away. We have so much in common, we both love soup and snow peas, we love the outdoors, and talking and not talking. We could not talk or talk forever and still find things to not talk about."

sherri ann for the win

[jennifer coolidge was my best supporting actress of 2000]

runners up: the commentary stylings of fred willard and jim piddock

I love Coolidge’s little pause before saying ‘we could not talk or talk forever and still find things to not talk about’. I like to think inspiration struck in that pause and Jennifer Coolidge improvised the most genius line in the history of cinema.