This post's title is dedicated to those poor sods who would harass people on street corners with that question -- "Do you like to laugh?" -- in order to get them inside of Comedy Clubs here in the pre-COVID Days of NYC. This pandemic's got me down enough that I sort of miss them! Anyway true story I seem to have become nightmarishly picky when it comes to Comedy. I have lots of old stand-by favorites from my more innocent, less jaded youth that I go back to time and time again -- Soapdish! Dirty Rotten Scoundrels! -- but it's not a genre I actively seek out very often anymore.

Truth be told I can be snobbish and weird about the genre. I guess I like Smart Dumb Comedy -- I don't mind a poop joke but you've got to give me something new and exciting with your poop joke. (Side-note: you oughta read MNPP pal Michael's terrific recent piece on the art of the poop joke with regards to Bridesmaids over at TFE.) I am simply incapable of sitting down and enjoying an episode of something as braying and needy as say The Big Bang Theory. It physically pains me, that sort of thing.

Okay I need a laugh, and I need one now.
What’s your funniest movie ever made? pic.twitter.com/KPsHbsYpT6
— Jason Adams (@JAMNPP) July 31, 2020

Of course this pandemic has really put that snobbishness to the test -- we need a good belly laugh, an emphatic guffaw, now and then amid these darkest of days. And so in a fit of want I tweeted out the above question last week, and in return I got a million and a half fun responses that I appreciated a whole bunch. Then naturally I just ended up re-watching Christopher Guest's Best in Show for the thousandth time...

... but I've got a Go-To Laugh List for when I need it now. And if anyone has any further suggestions please do give them in the comments. That said I forward all of this to say make it clear that I have actively been thinking a lot about my weird relationship with comedy -- how I'll almost always if I want to laugh put on a bad horror flick or something Campy like Showgirls before I'll even think to put on an actual trying-to-make-me-laugh Comedy Film -- when lo, behold, a trailer for a new Comedy Series should appear.

That's the trailer for Mapleworth Murders, which stars former SNL writer Paula Pell as a Murder She Wrote type Older Lady Sleuth, and which will feature cameos from lots of Smart Dumb Comedy Now people like Wanda Sykes, Chris Parnell, Nicole Byer, Maya Rudolph, Fred Armisen, Jack McBrayer, Annie Mumolo... I have a really good friend who's a Comedy Fiend and she loves Pell -- I think a lot of Comedy Fiends do. My only interaction with Pell was in the Netflix comedy Wine Country... 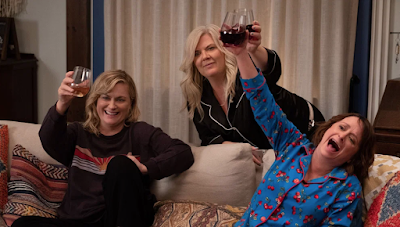 ... which is a good example of a recent comedy that left me totally and thoroughly cold. Except for Pell, who was its highlight I thought. But with a cast like Wine Country had -- Amy Poehler and Maya Rudolph and Tina Fey and Rachel Dratch and Ana Gasteyer! -- I should've been in Chuckle Heaven! So I guess what I am getting at with all of this is... I am dead inside, right? I'm just dead inside. Mapleworth Murders premieres on Quibi on August 10th! 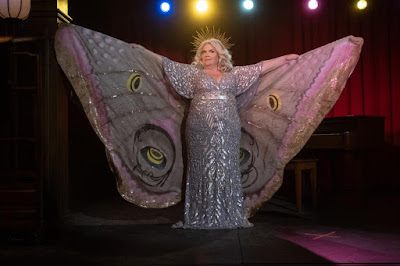 I've been watching a lot of Jean Harlow movies recently and she is such a BLAST. Hilarious, naughty and (at times) such a little stinker. Red-Headed Woman, China Seas, Libeled Lady, Diner at Eight, etc.

Not a movie, but The Good Place is very funny

La Cage aux Folles d: Eduard Molinaro, 1978. See the French version with subtitles. The dubbed version is no good. Queer identity has advanced since this was made, but if you suspend your 21st C sensibility it is hysterical. And is has heart. The director and script got Oscar nods in 1980.

Miss Pettigrew Lives For a Day d: Bharat Nalluri, 2008. A comedy for adults. It treads the razor thin between comedy and tragedy so every gay and bit of pathos lands with extra intensity. Frances McDormand and Any Adams are absolute delights. Not to mention Lee Pace whom you like so well. Seeing Miss Pettigrew makes me feel good.

Did you miss Paula Pell doing an homage to Elaine Stritch in the "Co-Op" episode of Documentary Now! (their riff on the "Company: Original Cast Recording" doc)? She's hysterical- AND can sing!
As for my go-to funny movies:
What's Up, Doc? -always and forever
Airplane! - sometimes I still notice something new
Raising Arizona - Holly Hunter. that's all.

And for camp:
Showgirls- duh
Airport '75 -with Gloria Swanson as herself; drink everytime someone tells her how good she looks (contractually?)

Blazing Saddles still makes me laugh like it's the first time.

I’m allergic to comedies like the ones from Christopher Guest and Mel Brooks. They’re so sweaty. Like full length Fozzie Bear sketches. Wocka Wocka we’re so FUNNY.

I'm used to a lot of supposedly outrageously funny or popular comedies leaving me completely cold...The Princess Bride, every Monty Python movie, I'm sure there are others I can't think of right now.

But the moment Maya Rudolph (who I find terminally unfunny anyway) was squatting in the street shitting in a bridal gown was the exact moment I turned Bridesmaids off and deleted it from my queue. Guess I'm just a prude, I found it crude, unfunny, and disgusting on top of a film that up till then, had simply bored me.

My go to comedy if I want to laugh is The Women. Still one of the funniest movies ever made and best casts ever assembled.

And I second The Good Place if you've never watched it. Hilarious and brilliant writing.

Wow, great suggestions already. Many of the ones I was going to suggest (One, Two, Three; Airplane!, Blazing Saddles, What’s Up, Doc) have been mentioned. I would add Lady Eve, and since you mention horror, the spoof What We Do In The Shadows.

Not a movie but you can’t go wrong with AbFab either.

His Girl Friday, The Producers (1967), Serial Mom, Dr. Strangelove, My Favorite Year, Play It Again Sam, Animal Crackers, Life of Brian. Every one of these movies makes me happy.

His Girl Friday, The Producers (1967), Serial Mom, Dr. Strangelove, My Favorite Year, Play It Again Sam, Animal Crackers, Life of Brian. Every one of these movies makes me happy.

Yes to Bringing Up Baby and The Lady Eve, both of which made me laugh out loud.

I'll admit I'm a sucker for the Naked Gun movies.

And Soapdish! Has no one mentioned Soapdish?

Return of the Living Dead, always and forever.
The Favourite.
Four Weddings and a Funeral.
Girls Trip.
Groundhog Day.
Wet Hot American Summer.
Addams Family Values.
The Brady Bunch Movie and the sequel for a delicious "Brady sandwich."
Royal Tenenbaums.
All of Nicole Holofcener.
Hal Hartley's Trust.
Sister Act.
I just watched Between the Lines on Criterion and it was really charming and lowkey funny.
Galaxy Quest.

Also Fraiser, which is timeless.