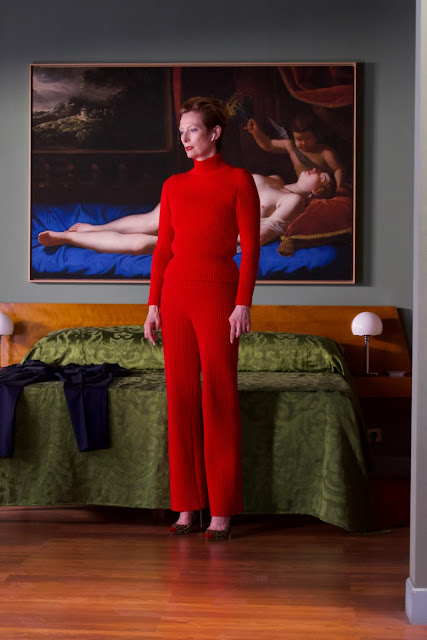 Back in February -- remember February? Yeah me neither -- I told you that Pedro Almodovar was going to make a short film, his English-language debut, starring Tilda Swinton. It's called The Human Voice, it's an adaptation of a Jean Genet story, and... it's done! Or at least done enough that it will premiere at Venice in September. Above is the first image from it, which is basically EXACTLY what every single one of us pictured in our mind's eye when we imagined Tilda + Almodovar. Admit it! That is what you saw in your head! Anyway the film's apparently about thirty minutes long, and here's a quote from Pedro:

"The Human Voice is a festival of Tilda, a display of her infinite and assorted registers as an actress. It’s been a spectacle to direct her.”


What a wonderful way to put it -- a "spectacle to direct her." I couldn't be more excited if Miguel Angel Silvestre was massaging my toes right now. Here's a behind-the-scenes photo from Pedro's brother's Twitter account: