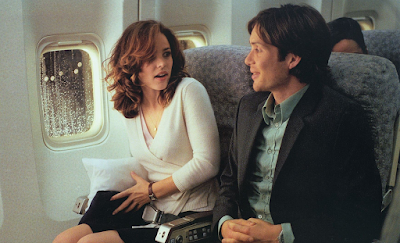 Lisa: My grandmother died.
Jackson: Oh.
Lisa: It's ok. She was ninety-one.
Jackson: Ninety-one?
Lisa: Yea.
Jackson: That's respectable. What was her secret?
Lisa: Grapenuts. And a guy named Duke.
Jackson: Excuse me?
Lisa: Yea, uh, she said the Grapenuts kept her
arteries clean and... Duke helped with the rest.

I don't know how many times I have prefaced one of these anniversary posts with the words "I haven't seen this movie in ages" but it's a lot, and I'm not good at my job -- I have the fact that today is the 15th anniversary of the release of Wes Craven's film Red Eye ion my calendar, I have had it in there all year, coming up, and yet I do nothing to go watch the movie so I can post something interesting or insightful about it. I always end up doing the re-watch a couple of weeks later, because I feel guilty then, that I didn't get around to it beforehand. So goes my life. Anyway happy 15 to Red Eye or whatever. It's good I think, from what I remember, ages ago. Here is my review from the time. Anybody watched it recently?
.
Who? Jason Adams When? 11:52 AM