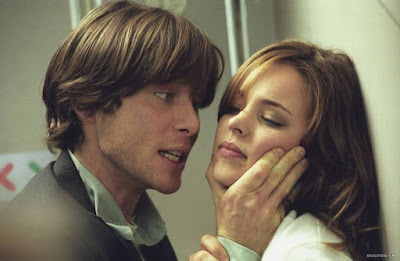 Oh boy, did I enjoy this movie. Great, great fun. The last twenty minutes or so, the entire audience was totally into it, shouting at the screen, jumping in their seats, and it wasn't annoying for a change since I couldn't help but do the same.

And yes, it does turn in to Scream 4 once they're off the plane, but you're not going to hear me complaining about Wes Craven exploiting his stock of slasher film techniques any decade soon.

I am going to try and refrain from gushing too maniacally about Rachel McAdams, as I have before, but she... is... terrific. TERRIFIC! Seriously, she gives a fine small performance here; it's a real character she creates, and effectively makes us like and care about. A lot of info is telegraphed to us about her, and she plays it all really well.

Cillian's a great villian - read any review of the film for an effective rundown on the creepy alignment of cheekbone and blue eyes into an off-putting malange. He too gives us a performance of just enough detail to let us in on all the character's about.

And that's what is surprising and most effective about Red Eye - it's about these two people locked in a battle of wills, and the special effects and shocks at the end don't hijack the story; it doesn't turn into (ahem MICHAEL BAY) mindless explosive twaddle. For a huge portion of the film it is two people sitting beside each other talking, and the drama inherent in that interaction. And because of the claustrophobic nature of the story, a huge portion of the film is shot in close-up - all the better to let the actors do their thing.

Great summer flick; I definitely recommend seeing it soon, with a big audience. It's what summer movies should be.
Who? Jason Adams When? 3:31 PM