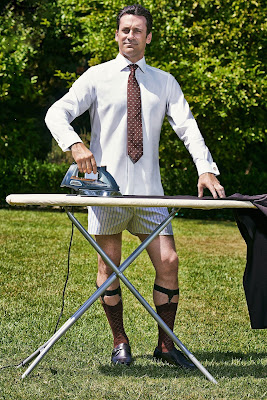 I apparently finished binge-watching Mad Men exactly one month ago, on May 31st -- it was my first time watching the show (or about 98% of the show anyway, I'd seen a couple stray episodes here and there over the years) and it was, to put it mildly, a treat. I loved every second of it. I linked to this when I was still in the middle of it but here's the Twitter thread I kept as I did the entire series:

I'm watching the first episode of Mad Men -- a show I have never watched (I know, I know) -- and I'm surprised at how young Jon Hamm already looks (compared to today I mean) pic.twitter.com/JpiJJ10FG8
— Jason Adams (@JAMNPP) May 15, 2020

Like I said it's been one month since I finished watching all seven seasons, ninety-two episodes, of the series, which I plowed through over the span of just about two weeks -- it was a lot! But somehow as soon as I was done my first thought was still I WOULD TOTALLY DO THAT AGAIN. For real! I would! The thing was I binged the show because Netflix was taking all of the episodes off of their platform in early June -- I only had enough time for the one viewing.


Well color me Peggy because Amazon has just announced they've snapped up the rights for their Prime streaming service, and they're all dropping for free on there on July 15th -- my birthday! A gift to me from the Weiner Gods above, halle-fuckin-lujah!

Probably the greatest tv series of all time.

Boxer shorts?!? Hamm needs the support of briefs. Maybe even a jock strap!

That’s one show I missed. I’ll probably get around to it some day...