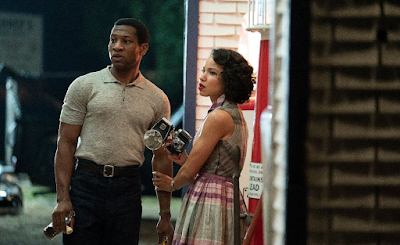 I was excited about HBO's forthcoming series Lovecraft Country the second it was announced last May because 1) I am a huge fan of the tentacled nightmares of Lovecraftian Horror and 2) Jordan Peele was attached to produce. It was only later in 2019 that I saw The Last Black Man in San Francisco and my crush (currently stratospheric) on the actor Jonathan Majors presented itself and Lovecraft Country became more about Jonathan Majors starring in it than anything else -- I say all this to make it clear that there are things besides my crush on JM that are feeding my excitement for Lovecraft Country. There really are! Even if, at this exact moment, I'm really fucking blinded by All Things Him.

But seriously -- they put him in the t-shirt in front of bookshelves! They did that! What do they want from me??? Reasonable-mindedness? HA. HA HA HA! Ha. Don't go looking for that here. Lovecraft Country is basically my number one anticipated property at this moment, and we've now got a date to fixate upon -- HBO will premiere the series on August 16th. Oh and here's the teaser trailer:

I still haven't read Matt Ruff's original book and I might wait at this point in order to save the show's surprises for myself, but here's the gist -- it mixes 1950s race relations with the goopy squicky monsters of H.P.'s world, which is in itself a delightful if you ask me way to stick it to the worst thing about H.P. Lovecraft, namely his abhorrent racism.

He'd probably be furious about this, the fuck-face. Good! I love his monsters but he can fuck right off otherwise. Anyway also on the show: Jurnee Smollett, Courtney B. Vance, Michael Kenneth Williams, and a terrifying looking Abbey Lee, the model turned actress best known by me for both The Neon Demon and Mad Max... 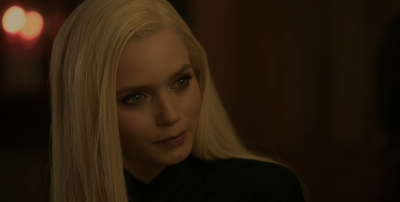 I totally thought she was Elizabeth Berkley for a second, ha!
.
Who? Jason Adams When? 1:11 PM

Not familiar with Abbey Lee, but she looks A LOT like Elizabeth Olsen here.