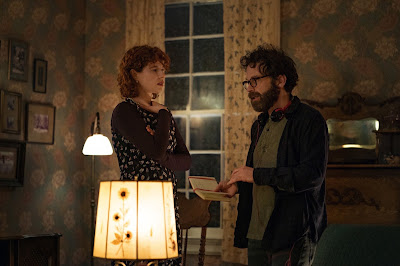 "I would like to have money that I don’t have, and I tell myself that I could write a commercial blockbuster.” But he also understood that he might be flattering himself; he’d never actually tried. He was proud of his commitment to do original, meaningful work. “There’s lots and lots of garbage out there that isn’t honest and isn’t trying to help clarify or explore the human condition in any way,” he told me, “and it sends people down the wrong road” — skews our perceptions of our own lives, and each other — “and it’s mind-numbing and it’s toxic, and I don’t want to have that on my résumé. I don’t even mean my professional résumé, but my résumé as a human being.”

I told you last week that Charlie Kaufman's new movie I'm Thinking of Ending Things with Jesse Buckley and Jesse Plemons was coming out on Netflix on September 4th -- well I should have mentioned we're getting Something Kaufman even sooner than that, because his book called Antkind is out tomorrow! I'd forgotten, I'd pre-ordered it months ago when it was first announced, but a reminder came today in the form of a big profile of Kaufman in The New York Times, which the above is a quote from.

It's not even the best quote from the piece -- if I told you that a profile of Charlie Kaufman in The New York Times made me cry would you think me odd? Trick question, you're here reading my site, you know I am odd already. But there's nobody, and I mean nobody, making entertainment in the world that I feel more of a mental kinship with than Mr. Kaufman, and the writer of this piece in the Times (Jon Mooallem) -- which was conducted through the weeks of quarantine here in New York -- gets that across exquisitely. Take this bit:

"This was one simplified understanding of who Charlie Kaufman was: He was someone who valued truth. When he detected the absence of it, it pained him. He would prefer, for example, if film critics prefaced their negative reviews by disclosing that they’d just had a fight with their spouse, or: ‘I don’t like this guy because I don’t like the way he looks.’ Because those things are true, he said. Our thoughts and feelings are true. They are facets of the world at whichever moment we attempt to describe it. “You’d be called self-indulgent, which I am all the time,” Kaufman said. “But if it’s done in a way that’s expansive, to me it’s very interesting. Because that is what’s going on. Because it’s true.”

I literally got called self-indulgent with regards to my writing just last week (read the comments on last week's "Horror Actressing" piece) and it's probably the most common criticism I get, and it's not one I have ever argued with -- I am indeed terribly self-indulgent! But Charlie in the direct quote above gets at the meat of WHY I am, what I am trying to do, and honestly... to hear my hero explain it in such simple terms... it makes me feel as if I am doing something right. And I've addressed all of this in depth before, but sometimes I go back and look at something like what I wrote right after getting out of Call Me By Your Name that first time and I think to myself, "My god, you barely talked about the movie!"

And yet I did -- it has never felt entirely honest to me to erase myself from my interactions with art. I don't experience art objectively -- good art, bad art, it's all channeled through my subjective experience of it, and grappling with the end product of that commingling, of my person and the art, that's all I can really offer to share with the world. The hope is that this shit and muck that's happening inside of me resonates with somebody else, if I get it across in an interesting way at least -- that's why Charlie Kaufman writes his movies and books (hell that's why Roland Emmerich directs his shitty movies) and that's why I write about them in turn. It what I have to offer. It's what I want to offer. Seems plenty.

Labels: Call Me By Your Name, Charlie Kaufman

I’ve posted it before, your voice is a treasure. i feel like i hear someone thinking and singing when i read you.