On The Irishman, and Other Things 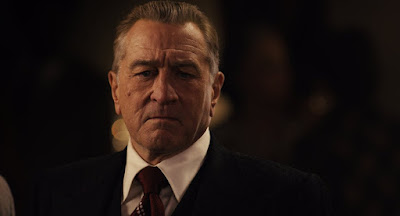 Just a heads-up that my review -- well if you want to call it a "review," a word which several commenters have already disputed! -- of Martin Scorsese's film The Irishman went up at The Film Experience last evening -- click here to read that, if you dare.

I'm a creative writer. I double majored in both Film Studies and in Poetry in college, and every time I write about film I'm trying to (improbably, perhaps foolishly) bridge the two. The very first things I remember writing as a kid, and this is no put-on, were poems that strung together nothing but movie titles. Truly horrible little things they were, with lines like "Pretty Woman Dressed to Kill / Dream a Little Dream and Stand By Me." But this fascination seems to have always been there -- of engaging with other people's work in an, uhh, atypical fashion.

I think of my reviews as a conversation. Well... I do when I'm inspired to speak with the piece of art in front of me anyway -- you can always tell I wasn't inspired when the review's a lot of plot and "this and that were good or not good." But when something moves me I want to move it back -- I want to talk to it. I want to take it up in my hands and look it over, dig around in it, and describe the thing I'm holding to you, and to myself. What the thing feels like, and what it made me feel like.

Just using Scorsese's The Irishman as the example since it's the example I've been given I really don't believe that Martin Scorsese and Rodrigo Prieto and Robbie Robertson and Thelma Schoonmaker and Sandy Powell and all of those actors and technicians and artists sat in a room discussing how to get attention for their particular and individual selves when they were handed this job. (Well maybe some of the actors, but that's their particular gig.) No more likely they sat in a room, many rooms, and they discussed how to create a world. A story. A feeling, a life. How everything was there to serve this final product, this Big Idea that they wanted to get across.

I want to engage with that Big Idea. With why they're telling this story, and what this story said to me. We've got months and months and months to dissect the pros and cons of the crafts and place them in context to other movies that have rushed to come out before the Valhalla of the Oscar Stage swallows up everything's worth. I'm just trying to engage one on one with what all of those people came together to give me, as a collaborative whole. We can, and will, work backwards from there.

The most depressing discovery I’ve made off writing on the internet for as long as I have is how desperate people are to just be told what to think
— Jason Adams (@JAMNPP) September 28, 2019

Love your "reviews." I sometimes read them once before and once after I've seen a film. I know you won't spoil it, but instead will give me an impression, something to go into the movie with and have my dial tuned into. There are enough thumbs up/thumbs down reviews in the world.

Spoilers are part of what's funneled my writing in this direction -- and yes, my writing has been shaped over time by how we communicate on the internet; I don't think I'm forcing my will onto a marketplace but really just trying to find a different way of doing it. AnywayI have no desire to regurgitate plots and spoil the experience of you seeing the movie; I just want to put the thing into the context as I see it, which might be helpful for somebody else. That's actually been a big factor in how I've come to where I've come on writing these things.

Anyway thanks Tom. I realize that writing this sort of defense makes me sound like I think I've got it all figured out and I don't, I know I can get hella sloppy and I root around in ideas like a pig with its snout in the ground. But I do feel like I'm aiming my efforts in the direction i want to be aiming them in, and that can be some satisfaction when you're not "making money" or "getting famous" or "doing anything practical with your life." :)

i think my gushing over your reviews in the past might hint at the esteem in which i hold you and your work, but let me repeat: i love your reviews and usually look forward to them more than the movies themselves

Your writing is poetry in the best sense. You don't just give the facts, but the essence of a film. The reader can actually smell and feel your opinion better than any reviewer since the great Pauline Kael, the highest compliment I can give.

Oddly, I didn't realize you had written that review until I read your blog this morning. I will admit that I was a bit thrown when I initially read it but also admit it made me want to read it a second time, then a third. I often find I'm reading the same review over and over again. Yours was not only a refreshing change of pace but compelled me to want to see a film I was ambivelent about. Thanks for giving us something "different" to read and forget the haters, continue to stay true to yourself. Actually, forget that, consider it an honor that a bunch of losers, who need to hide behind screen names to blast something that they don't have the brain power to understand, took offense.

I must admit I'm one of those who are sometimes confused by your reviews. I appreciate what you're trying to do, even if I don't necessarily get it all the time. To refer to your tweet, it's not that I want to be told how and what to think when I read your reviews, it's that I want to know what YOU think of the movie. I think you're a good writer, and there are many times when I'm in the mood to delve deep into what you're writing to suss it out because I like doing that when I'm in that frame of mind. Then there are times when I find I don't have the time, patience, or energy to untangle your review because I've found a few to be frustratingly opaque on what you actually thought of the movie.

I also think your reviews will garner that reaction at TFE because it's such an awards obsessed site, and you clearly are not and your opinions from the general consensus there often wildly diverge from each other. I think your perspective is great there because I find awards conversation tiresome, but I'm clearly an outlier with that site's general audience.

Anon -- those are all constructive criticisms that I one hundred percent get and really do agree with; it's the real thing I wrestle with the most. I know I get lost in my own little wonderlands of word games sometimes and they become the point unto themselves, more than "the point" ... on occasion. Sometimes I start dissecting sentences and inverting them on themselves and it gets away from me -- I love run-on sentences more than anything in the world, and finding the rhythm of them, the syncopation I can hear in my head that I try to get onto the page, and well I get lost in that sometimes. As this comment attests! But I try to go back through and focus things on the subject at hand -- my god you should see my first draft of things; now those you'd have no idea what the hell movie I was talking about. :)

Keep doing you. Your reviews are great. So many of the "reviews" from (most of) the people who pass as critics today all read the same and don't reveal a whole lot about that particular person who saw the movie.

I think about all the film writers who are trying to think of noncliched ways to lede their reviews with remarks about Scorsese's long and storied career, etc., and here you come with: "We have walked with this man's camera through space and time together and now here we are, all of us Old Folks, stalking one another down antiseptic corridors on shaky wheels." I LOVE IT.

I always, always love your reviews and read them even when I haven't seen or have no intention to see the movie its about. It really is like reading poetry or prose sometimes, and if I want a blurby headline review I can go to any one of a million sites to read that. I like knowing how the movie made you feel, and often times I can feel the same emotions reading your words that I felt watching the movie.

The longer "reviews" especially though do make me want to read any book that you'd write! You have a way with words and I think you could do wonderful things in that arena (I mean, you have here on this very site, but I mean more long, long form)