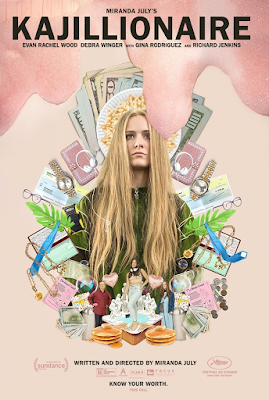 That there is the first poster for Miranda July's new movie, Kajillionaire! (via) Hopefully everyone reading this site knows what a devotee of July I am, but if you don't, know it -- Me and You and Everyone We Know and The Future are both masterpieces in mine own never humble opinion, and I've devoured every book July's written (of which there are many!) like it's that gunk that poured out of the earth and made the mosquitos huge in the 1976 cinematic classic Food of the Gods. It makes me big in places I didn't even know I had!

Anyway I preface (yes that was a preface) what I am about to say with all of that love because I feel I should make my devotion clear before admitting, hesitantly, that I am a little worried about where my feelings for Kajillionaire might fall. Not because it got mixed reviews at Sundance -- I don't care about other people's opinions. (Other people thought The Future was a step down from MAYAEWK and those Other People were incorrect.) 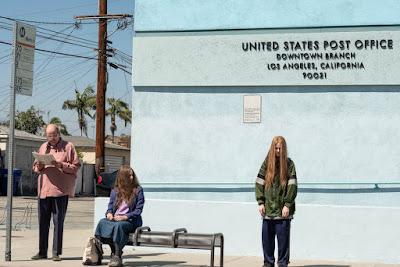 No I am worried because, sorry to say, I am not sure I think Evan Rachel Wood is a good actress. She was -- again in my not ever humble opinion -- straight up terrible on Westworld anyway, like "You are killing the show for me all on your own" bad. And that's my most recent interaction with her skill-set. But going back I've never capital-L Loved any of her performances -- I guess the closest I've come was The Wrestler and maybe the Mildred Pierce miniseries but even those with some hesitation. And I haven't seen Thirteen in so long I can't remember if she was actually good or just the right age.

Anyway I hope Miranda taps into some never before appreciated quality of ERW for me and makes me see her in a new interesting light, I really very much do. That's always exciting, when that happens! And if not Kajillionaire also stars Richard f'ing Jenkins, Debra f'ing Winger, Gina f'ing Rodriguez, and Da'Vine f'ing Joy Randolph, who wowed the socks out of me in Dolemite is My Name last year. We'll find out on September 18th when the movie (supposedly) comes out! And maybe we'll get the trailer for it soon...
.
Who? Jason Adams When? 2:30 PM

She’s.. fine. I have faith July will get a decent performance from her.

Love her!!! She’s so original. Did you ever get her App she designed? It was a one-way message delivery system where the members were the messengers. You would send a request to have someone take a message, like really walk it over to someone you needed to give it to, and they would do it. It really only worked if there was someone ready and able right near where your message receiver was at the time. I tried to get one to my husband but couldn’t find anyone ever. It was brilliant, pure MJ putting a surreal spin on communication. I just wish I had been able to make it work.