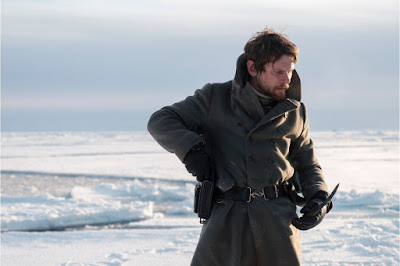 It's been well over a year since I last told you about Andrew Haigh's forthcoming BBC miniseries adaptation of Ian McGuire's book The North Water and how it was set to star Jack O'Connell and Colin Farrell as rival harpooners on a doomed Arctic expedition and now, finally, some photos! Okay so "Rival Harpooners" is just a thing I wanted to say -- Jack is actually the ship's doctor while Colin is playing a murderer who finds his way onboard, so it's more complicated than just some crossing of the harpoons. I haven't read the book but it supposedly goes very dark -- I keep thinking of the first season of the series The Terror, but then I just like to think about The Terror. (God The Terror was so good.) Anyway not sure when BBC is airing this but it's supposed to come before the end of the year. You can see a few more shots of the cast over here. 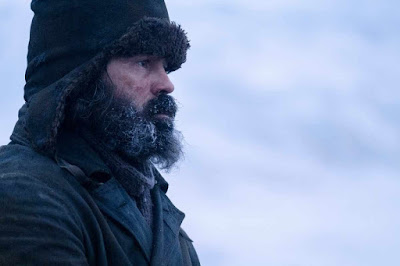 My understanding is that they were 99% done with filming in March and had ONE WEEK left before the pandemic shut production down. So I guess the question now is if they’re waiting to finish that last bit or trying to find some kind of editing workaround.

It’s a great book - I read it after hearing about this miniseries with some mild trepidation since it seemed like it could go annoyingly macho and nihilistic. I was really surprised to find how much I enjoyed it (comparisons to The Terror are apt but it’s more streamlined and nimble). Really looking forward to seeing what the actors do with it.

First time hearing about The Terror. Looked it up. Oh my! I’m diving right into that one! Thank you for mentioning it.