I Do Wanna Date 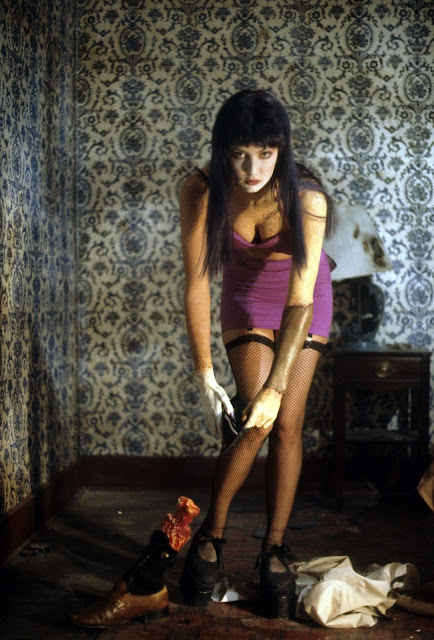 Last week marked the 30th anniversary of one of my favorite pieces of Great Trash, and no I don't mean Total Recall. I mean I also mean Total Recall -- I wished that Verhoeven classic a happy 30 last Monday but that also happened to be the 30th anniversary of Frank Henenlotter's trashterpiece Frankenhooker, and that's what I'm here to mark today. (I'm still not over the fact that there might be a person out there in the world who on June 1st 1990 went to a double-feature of these two movies -- what a charmed fuckin' life!) We're wishing Frankenhooker a happy 30 a week late because I wanted to do it right and proper, and so that's what I have done -- click on over to The Film Experience for this week's "Great Moments in Horror Actressing" post, wherein I argue that Patty Mullen is a comic genius. Well she is, dammit! I will brook no debate on this one. She should've worked way more than she did.
.
Who? Jason Adams When? 2:51 PM

So glad to see some love for Patty Mullen's performance in Frankenhooker -- she was perfect in it, and I wish she had been in more movies. She's pretty much the only reason I watched Doom Asylum (Ruth Collins was the pleasant surprise in that one) but Frankenhooker woudn't be nearly as good without her.

One of my favorite parts of working at Blockbuster Video was the Frankenhooker VHS box that had a little button you could press to make it say “Wanna date?”

I remember working at a West Coast Video when that came out, on the VHS jacket it said 'wanna date'. I've never seen it myself