It's been two weeks since our last post on Mark Ruffalo in his ongoing HBO series I Know This Much Is True, and it's been two weeks plus one day since our first post about that same thing, so I think we should check back in -- especially since those two weeks have had two episodes with some Mark Ruffalo to share. Besides all the "acting" stuff I mean, obviously. The acting stuff has been fine, good even, but I kind of hate-watch the show -- it's so relentlessly miserablist. Nothing but torment upon torment rained down on its characters. It feels like something by Alejandro González Iñárritu to me and we all know how I feel about Alejandro González Iñárritu. (If you don't here's my review of Babel, go nuts.)

Derek Cianfrance has had these tendencies before -- Blue Valentine and The Place Behind the Pines and The Light Between Oceans all flirted with despair and trauma, but his characters felt like more than a sum of those things -- Mark Ruffalo is doing his best to draw through-lines between each horror the Birdsey Twins are experiencing, and his best is very good, but the show still often feels like an escalating series of assaults on the audience, to the point where it's become a little comical to me. I suppose Job had some bitter laughter at his particular lot too, I don't know that the Summer of 2020 is great timing for this viewing experience. I don't know if you noticed but we've got enough on our plates right this minute, Derek Cianfrance. Anyway I suppose everyone's mileage may vary so tell me what you think of the show if you like in the comments and after the jump, more gifs... 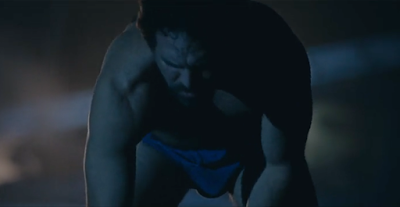 While I'm liking the show, and the showings of Monsieur Ruffalo, the timing of this just could not be worse. I have to switch to light comedies after every viewing.

Ruffalo better win that Emmy for this. Maybe that will push other actors to have Testicle scenes!

I hate Iñárritu. I get what you’re saying but this show doesn’t feel like Iñárritu at all to me. It’s better than anything he’s done.

The most offensive film I’ve seen in the last decade was Birdman. I saw Babel, and it didn’t leave much of an impression. But Birdman was about the worst, most awful example of trotting out the ‘straight white man as everyman’ yet again. Like Forest Gump, it reeks of straight male entitlement posing as something for everyone.