No Really Hooray For Hollywood 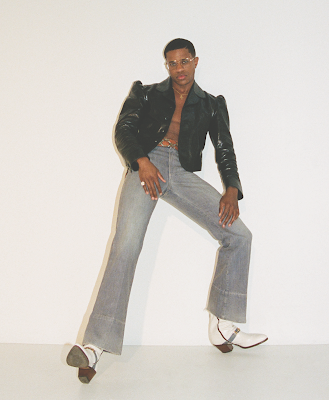 There's a nice chat with Hollywood star Jeremy Pope up at Interview Magazine that accompanies this photograph, click here for that -- and if that ain't enough I recommend this big ol' "Gratuitous Jeremy Pope" post I did back when Hollywood got announced. Anyway now that the embargo's lifted I can admit I've already watched all the episodes of Hollywood myself, I been done with it for weeks now, and well...

... let's just admit that that tweet was about this show. It's Tighty-Whities-riffic! I'm sure by the time I get up tomorrow morning at 8 or 9 or whatever is time anymore o'clock some diligent internet person will have already put all of the gratuitous scenes in the series onto this here 'net, but hot damn there are a few moments of the gratuitous sort to be excited about. Pope and David Corenswet... 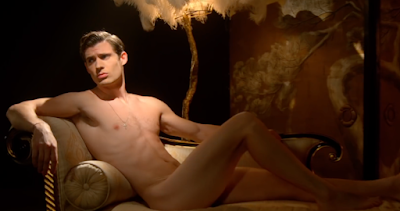 ... are absolute stars in the heavens in the making. I've only skimmed a few of the reviews about and they seemed fairly negative but they also seemed, to me, to mainly miss the point -- you can't criticize a show this purposefully cornball for being cornball. Cornball is the point! It's as broad as any Busby Berkeley "We're gonna put on a show!" cheese-fest, and in these dire times and dark days that we're in the midst of this here cheese and corn platter really hit the spot.

It was impossible, for me anyway, not to get swept up in its yee-haw vim and vigor -- when they made this show they can't have known they'd be dropping it smack-dab straight into a new Great Depression, but it feels exactly of that old-fashioned ilk anyway; if there'd been chapter breaks where Shirley Temple came out and did a lil' number it would've fit right in. Sure that gee-whiz-whillikers tone makes for an occasionally awkward smash up against the Sexism and Homophobia and Racism and Sexual Abuse that it's addressing but I think that's what makes the show interesting and funny and surprising. It's super duper silly, but it's big and openhearted and I, goddamnit all, was thoroughly entertained.

I absolutely love it! I think it was made for me. Yes its cheesy but its supposed to be and everyone is having a great time. Perfection imo

I’m only a few episodes in but I LOVE it so far.

The Vivian Leigh portrayal is bad though but I’m liking Rock.

I am just about finished with it, and totally love it. It's cheesy and there are so many falsehoods in it, but it's really a lot of fun! The acting is terrific and what a cast!

Just finished the 7th and last episode and want a second season! Just what I needed to get my mind off of the state, of bizarre current events! Thanks Ryan Murphy! I loved it! And David Corenswet is my new eye candy crush!😊