Fringed For His Pleasure 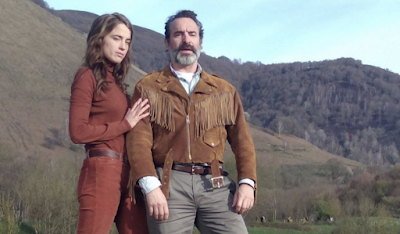 It begins with the kernel of an idea. Like literally let us say for our argument's sake an actual kernel. A popcorn kernel. What if, instead of paper and metal, we used popcorn kernels for currency? Would they be worth more popped or un-popped? Would movie theaters then become our banking institutions? Picture foiled Jiffy Pop containers piled up like gold bars in Fort Knox, high to the ceilings of the local multiplex. Is butter change? Salt cubes doubloons? Anything's possible in this brave new popcorn kernel world.

That's the sort of childlike imaginarium you feel steeped in whenever you step into one of the films of French director Quentin Dupieux -- a place where car-tires hunt people for sport and TV sets use radio waves to explode us from the inside, just because he thought that first kernel up and went step by outlandish step from there. And now, thanks to his latest miniature wonder of a movie called Deerskin, we will enter a place where Oscar-winning actor Jean Dujardin becomes fixated on stealing all of the jackets in the world so that his own jacket, made of yeah you guessed it, becomes the only most fabulous coat in all of the land. Watch out, Joseph -- The Artist is coming for all of your Technicolor Dreams!

I know it's a bit of an easy gag, perhaps not a friendly, on the face anyway, one either, to say that one of your favorite things about a movie was its runtime was short. But I also feel like, at this point, Dupieux knows where Iright 'm coming from -- all of his movies introduce their central goofy conceit, play it out to its absurd illogical and always delightful conclusion, and never once overstay their welcome. Deerskin gives us 75 straight minutes of exquisite ridiculousness, and then exits stage left leaving me wanting just enough more, and not a whit less. 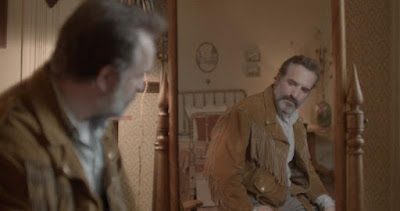 Dujardin plays Georges, a man who's just lost his wife and who seems to be having, uhh, a midlife crisis of sorts. We meet him driving into a mountain village where he flushes his (it must be said absolutely beautiful) old corduroy jacket down a gas station toilet; he then immediately spends every penny he has on him on the fringed deerskin coat that will come to define him... or really the absence of a Him now -- like a calfskin succubi the coat begins telling Georges things that would've made Richard Berkowitz's dog blush.

As Georges meets the people of this little mountain village -- including a totally up to the challenge Adèle Haenel, matching Dujardin eye-bug for eye-bug, as the local barkeeper -- he and his coat begin hatching their scheme: they will direct a movie as a ruse to steal people's coats from them. I would say this makes sense in context but it's nonsense there too, most delicious nonsense, and I adored every nonsensical frame of it. By the time Georges was dragging a ceiling fan down a darkened street and decapitating people with it I was, mais oui,  entirely enraptured -- wrap me up in this sweet warm Deerskin, it's some toasty nonsense I now call home.

Deerskin will be begin screening online at virtual theaters around the country (including my beloved FLC here in New York) tomorrow -- you can click here and see if it's playing at one of the virtual cinemas near you. Here's the trailer:

I saw the trailer for this a while back! Possibly even pre-virus. And thought it looked absolutely insane.
Polanski's "An Officer and a Spy" was my last film pre-lockdown here in Germany. Dujardin was the star and it's a great one for fans of moustaches, uniforms and fin-de-siecle scandals.