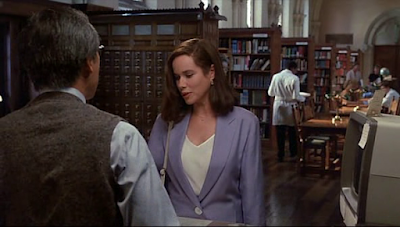 I don't know about you but I have been watching a ton, a literal ton, of movies while home quarantined during this pandemic. I did a big post listing some of the new stuff I'd watched last week, but even more than new stuff I've been taking advantage of this time to re-watch old movies. That's been one of the main victims of life's pre-pandemic busy-ness -- seems like I always had a new screener to see, and so space for older stuff kept growing smaller and smaller.

Anyway one of the many many films I have used this newfound time to reexamine was Tween-Me's favorite tearjerker, 1988's Beaches, starring Bette Midler and Barbara Hershey as lifelong friends from the opposite sides of the tracks who weather all kinds of storms -- long distances, musicals about boobs, and men, so many men -- until a storm called Viral Cardiomyopathy becomes the one storm that they just can't bridge. 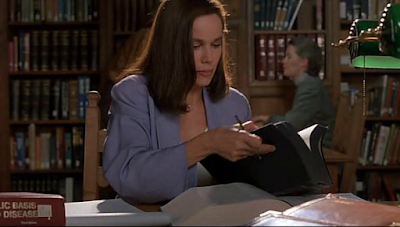 I always used to think that (spoiler alert I suppose, although this movie's over 30 years old now) Hershey's character of Hillary Whitney -- and a sidenote: I always LOL that that the rich girl in Beaches is named Hillary Whitney; it's like the rich girl name in a Depression-era comedy. It's even funnier to me than Margaret Cho's great joke about Bette's "C.C. Bloom" being the name of a gay bar in Scotland...
.


.
Anyway I always used to think that in the grand old-timey tradition Hillary Whitney died of Vague Movie Disease; you know the sort where they suddenly cough blood into a napkin and are dead two scenes later, staring blankly up from their lover's distraught arms. But Beaches does actually name the illness that Miss Hillary Whitney dies of, and funny enough that's exactly the sort of thing a 42-year-old person living inside of a pandemic ends up hearing and noticing, unlike an innocent 12-year-old with his whole pandemic-free (or so he thought!) life ahead of him.

Anyway "Viral Cardiomyopathy" is a real thing -- a degenerative heart disease that, sidenote, is just the sort of thing that COVID would take full advantage of. (God I am being such a Debbie Downer right now.) And once Hillary Whitney finds out she has it three things happen: one, she goes to the library to research her own disease, sitting alone among the dimly lit stacks and realizing that she's not much longer for this world. Two -- Bette starts to sing her gloriously sad cover of "I Think It's Going To Rain Today." And finally, three -- Jason here starts to sob and sob and sob uncontrollably for the remainder of the film, and usually for about another half an hour after that. That much, turns out, remains true whether I'm 12 or 42. Here's the whole sequence:

My husband has never seen this movie (or Steel Magnolias; I am obviously failing him, at least as far as 80s diva tearjerkers go), but I can't quite bring myself to watch it again -- I just don't feel like ugly crying right now, and as soon as those damned horses pound down the beach and Bette and Barbara grab hands and the door to the hearse opens ... well, that's it for me.

...so now I suppose I'd better haul m'DVD out (and my soundtrack on CD; I believe I had it on tape too, once upon a time). Thanks for the incentive!

That scene really does have your name written all over it!! I'm not much of a crier but even if I'm not a bucket of tears it's a heart ripper of a movie.

You talking about "Movie Star Disease" reminded me of Bette Davis in Dark Victory. Enough time to send hubby George Brent off to his convention then the angels start to sing when she hits the steps and ultra glamorous soft focus fade-out!

Here's one for you to fill some of your quarantine hours (well hour it's only 66 minutes) with if you haven't seen it. It's called Quiet Please, Murder and stars George Sanders. It's set almost exclusively in a library! Here's the link.

If you or your loved ones have/had a serious illness then you end up hearing and noticing anything about illness. Makes you wonder how you were so ignorant and carefree before and how the rest of the world is until it happens to them. Everyone's life is a tragedy in the end until we figure out immortality.
Anyway Bette is my favourite <3

I always thought "I Think It's Gonna Rain Today" is a better song and better performed than the other song from that movie....

It's not exactly a Margaret Cho joke. It's one by a cruel god on the LGBT population of Edinburgh. I spent many terrible nights in my late teens there and the floors were about as sticky as you might imagine. The vibe was much, much less sexy.