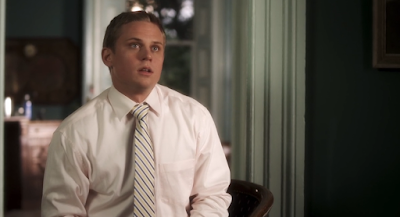 Violet: What would you say are the most
effective means to fight depression?
Thor: Beer?
Frank: No, beer's a downer! Cocktails! Hard
liqueur and spirits is what really gives you a lift.

Surprisingly he hasn't but doesn't it seem like our beloved Billy Magnussen, who's turning 35 today, should have played characters named "Thor" more than just once by now? I don't even mean the superhero -- although I'd have loved to have seen Billy's take on the Thunder God. He just... looks like a Thor. More specifically in the way of Chris Zylka's character called "Thor" in Gregg Araki's Kaboom, I mean. Which is also definitely a character Billy could've played!

Basically what I am saying is give us the Billy Magnussen Thor Universe we deserve, dammit. On that note if y'all would like to do a "Do Dump or Marry" for Chris Hemsworth, Billy Magnussen, and Chris Zylka (loads more Zylka at this link) in the comments right now I wouldn't put up much of a fight about it!

Do Hemsworth, Dump Zylka, Marry Billy! Aside from being so adorable he always comes across as a nice guy who also seems to have a brain in his head.

I'm sick to death of seeing Hemsworth all over the place - he's totally over-exposed - but I'd have to do him just because...
Dump Billy because meh...
So that leaves Zylka to marry; I could do a lot worse

blondes aren't really my thing but if you forced me...

dump zylka
do billy [oh, the enthusiasm]
marry hemsworth [for the eventual alimony]

I'm with Par...Blondes, especially hairless blondes, are not my cup o' tea.