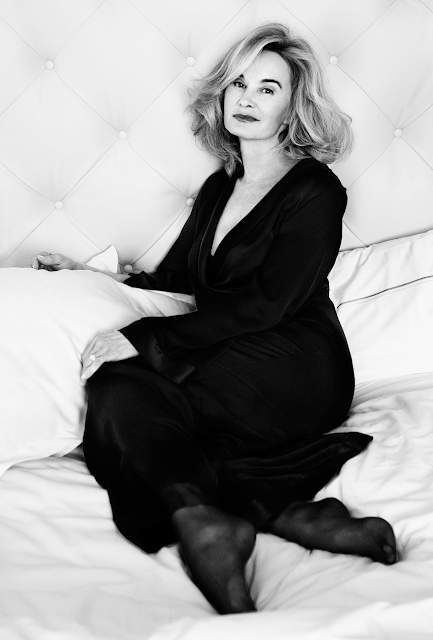 Do we think that two-time Oscar winner and living goddamned legend Jessica Lange will ever get the chance for a third Oscar? The Movies seem to have given up on her -- or possibly, given her firm temperament, vice versa, although I doubt it -- and so she's taken to television and the stage where she gobbles up all of the awards there. But I think if somebody was smart enough to toss a good movie role her away again... hell I don't think, I know at this point, that she'd wow us yet again.

Anyway the Oscars are sure as fuck not why we're here -- we're here because it's Queen Lange's 71st birthday today, and we've devoted this week's edition of "Great Moments in Horror Actressing" over at The Film Experience to her performance in Martin Scorsese's Cape Fear. Otherwise known as maybe the most hand-wavy role in a career full of hand-waving, but that's just what I love about it. If ever a movie called for heavy handedness...

Your GIF is my fav scene of hers in that movie...When she talks about the dog winding down like a clock. Felt in my guts.

She was not very appreciated for this perf, but she was right to insist with that kind of projects...