Watch Out For That Treeeee 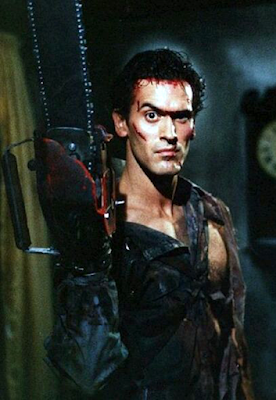 I just re-watched the original 1981 Evil Dead earlier this week (once again due to my current Gaylords of Darkness obsession, mentioned earlier today) and talk about a movie that holds up. I usually always watch Part II because I dig its humor and Bruce Campbell is at his hotness peak there, but the first movie should not go under-loved -- it's a good damn time at the movies, with shocks and soul-tickles a'plenty. I was also serious when I asked this question on Twitter...
.

Do we think Scott gets raped by the trees in the forest in the original Evil Dead as well? When he bursts back into the cabin after trying to run off he is TORE UP and that possibility never occurred to me until this viewing pic.twitter.com/CcMzDw06dK
— Jason Adams (@JAMNPP) February 4, 2020

.
... which I didn't get any replies to, because maybe people thought I wasn't being serious? Or was maybe that I was being light about Tree Rape? I'd never be light about Tree Rape. I actually think the film might be implying that and it's not something I'd ever realized until this watch. Obviously it's not in your face like the gratuitously terrible scene with Cheryl (Ellen Sandweiss) since the one with Scott (Richard DeManincor) happens off-screen, and that makes a huge difference in its impact. But it does inform the Evil Dead Universe in its way. It should just be noted!
.

.
Anyway! Tree Rape aside! I'm here because of yesterday's big Sam Raimi news, that he's in talks to take over the Doctor Strange sequel, subtitled In the Multiverse of Madness, after the first film's helmer Scott Derrickson dropped off the flick several months back. I am one hundred percent... well maybe ninety percent... ambivalent about this news. Mostly because there have been tons of rumors that Raimi was going to make another horror movie soon, and I want that way more than I want him to get swallowed up by the Marvel machinery. They take everything dammit! See also:
.

I am extraordinarily pissed off anew that Marvel has swallowed up and robbed us of all the great Elizabeth Olsen performances we should be getting pic.twitter.com/ZmaHhneXvW
— Jason Adams (@JAMNPP) January 31, 2020

.
(Seriously, I know those glimpses of the WandaVision show in that Superbowl trailer were hella weird but Olsen is so much better than this nonsense and should be gifting us with complex adult performances by now. She barely works besides for Marvel now!) Anyway I know that Sam only made one of, if not the, greatest superhero movies ever made. His Spider-mans are legendary.

Doc Ock forever. And admittedly his brand of cinematic nuttery is exceedingly perfect for the Doctor-Strange-verse, with its pulsing transmogrifying realities shifting on top of one another -- I have no doubt he'll find some ways to blow our minds. Plus the Multiverse story is supposedly a hardcore horror one, from what I first read about it, and that makes Raimi even perfecter. I will probably come to regret my hesitation. Except not. Except unless he takes his paycheck and makes Evil Dead 4. Then all is forgiven. As long as he finally answers my tree-on-man rape query. Make an entire sequel about that dammit!
.
Who? Jason Adams When? 3:53 PM

I realize that shitting on comic book movies is part of your brand now, but there’s no need to be willfully ignorant, too. Elizabeth Olsen is two seasons into her wonderful, devastating show Sorry For Your Loss. Maybe check that out.