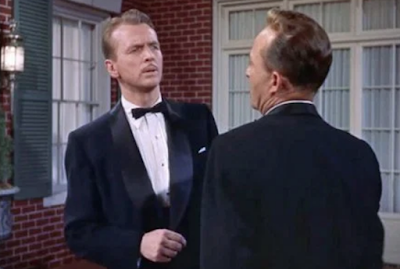 George: That sounds like Tracy's voice.
CK: No, no. It's just the night watchman.
George: It's a woman's voice.
CK: Well he's a lyric tenor you see.

I've been falling down some real random holes today -- I know I know, what's new -- but this might be the most random of them all. I've never been a huge fan of High Society -- I prefer its non-musical version The Philadelphia Story since it's got way less Bing Crosby -- so I never much paid attention to the character of George, but perhaps I should've been? 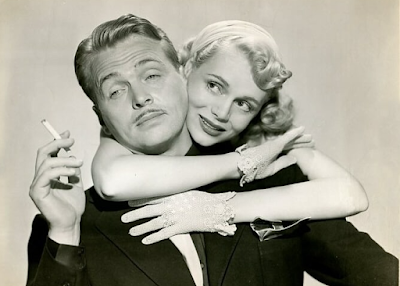 The actor John Lund was born in my hometown of Rochester, New York, on this day in the year 1911 (yes the exact same day as Ronald Reagan, boo) and he didn't start acting in the movies until his mid-30s, after being in advertising for awhile. But he worked opposite a bunch of big names, including Barbara Stanwyck (in No Man of Her Own), Gene Tierney and Thelma Ritter (in The Mating Season), Marlene Dietrich (in A Foreign Affair), and Olivia De Havilland, about which he said...

"Each picture has given me an inferiority complex. I've become face conscious. Projection rooms are torture chambers to me, at this point. When I saw the first day's rushes on To Each His Own (1946), I went home and started packing. I had thought I was smiling tenderly at Olivia de Havilland, but, on screen, I looked as though I were ready to bite her ear off, and I didn't have any eyes at all. After that, I refused to look at myself, but I began enjoying the work."


Now's where I admit that all of this said I've seen several of his films and to be honest he never left a huge impression. But I never knew he was from Rochester until now, and so I feel like giving him another look. Does he have any fans out there reading this? What would you recommend watching to get the Full Lund? He looks pretty solid in his cowboy gear... 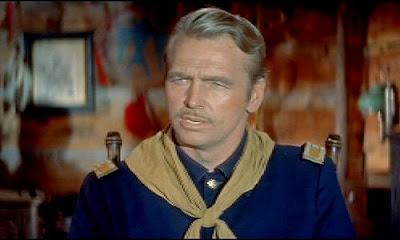 ... he made a pile of incredibly similar looking Westerns in the 1950s but I think this is from 1955's White Feather with Robert Wagner and Jeffrey Hunter once again wearing redface in the title role, which I know is totally unacceptable now, but... 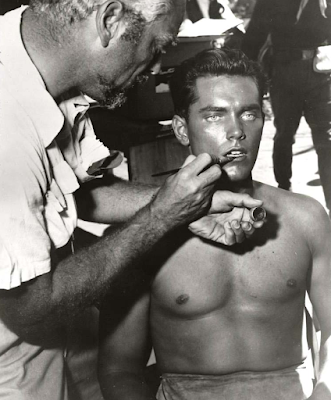 ... we all can just agree that Jeffrey Hunter was
a insanely babely babe right? Right. (More Jeff here.)
.
Who? Jason Adams When? 5:14 PM

I've only seen him in "The Mating Season" - thanks to the classic AMC days. I think he held his own pretty well against powerhouses Gene Tierney and Thelma Ritter. I like good ol' fashioned whirlwind romance/mistaken identity flicks and this one pulled off both really well. I play this often for a guaranteed pick-me-up!

I think your assessment is pretty on the money. I certainly thought of him as a movie star in the 50's of which I am a child of, but he wasn't one of the movie stars, the male ones, I mean, that kept me excited and anxious to see the new film he was in. He was fine and solid, and dependable. If there are pictures that he really shown in, or made a mark, I don't know them, and I saw many many many movies in my small town in the 50's when the pictures changed almost 4 times a week with double features on Saturday and the admission was 12 cents for kids.

You haven't misjudged him. He was one of those staples of big female star driven vehicles in the Golden Age-the bland leading man (see also Richard Egan, Wendell Corey, Michael Wilding among others) who the STAR could plow over or just push out of the way so the spotlight remained firmly on them. Solid and stolid, talented enough not to ruin the film but adding little too the ultimate result.

Because of that facility he did manage to appear in several very fine pictures even if his contribution isn't a main reason to seek them out.

Aside from the aforementioned The Mating Season (a total delight!), To Each His Own (where he gets to be unmemorable in two roles!) and High Society (which I like about equally to Philadelphia Story) there's:

Night Has a Thousand Eyes-a super little chiller with a great Edward G. Robinson performance and the ethereal doomed Gail Russell and her huge limpid eyes.

No Man of Her Own-Anchored by a fantastic Barbara Stanwyck performance as a destitute pregnant woman who assumes a dead woman's identity after being mistaken for her following a train wreck.

Dakota Incident-Rugged Western of a group of stagecoach travelers stranded in the desert by an Indian attack. It's not as high quality as the rest but I have a soft spot for it since it stars my girl Linda Darnell (ravishing in a bright red dress) and a strong supporting cast.

If a Man Answers-Cute romantic comedy that paired Sandra Dee and Bobby Darin during their marriage as a young newlywed couple. The wife fears the husband will stray and her mother (a divinely chic Micheline Presle) offers some radical advice.