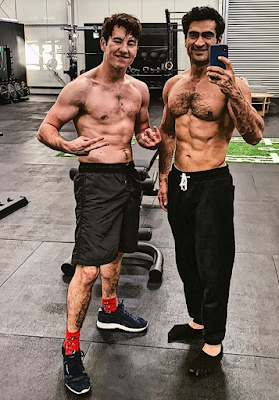 Okay first fucking things first how has this photo of my boys Barry Keoghan and Kumail Nanjiani shirtless at the gym escaped my eyeballs for forty-eight straight days? Barry posted it on his Instagram on December 20th! That was in an entirely different decade, yo. Granted that was only a couple of days after Kumail first revealed his big boy Marvel Movie physique (see here) so perhaps this tinier wave to those tidals was lost in their wake, but still. This one makes it gayer with one of my faves! Forty-eight wasted days of my life, damn.

Barry is co-starring with Kumail (not to mention Richard Madden and Kit Harington) in Eternals, which is set to come out in November -- Barry's playing the character called Druig, cousin to Ikaris (aka Madden's possibly homosexual character), and I think he's kind of a bad guy? His Wiki bio says he likes torturing people, including his cousin -- ooh Barry Keoghan torturing Richard Madden, I could so be into that. 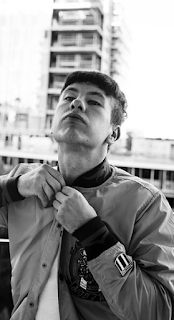 Blah blah blah I'm not here to talk about a blasted Marvel movie! Funny how they swallow everything up, innit? I'm here to talk about the accursed TV adaptation of Brian K. Vaughn's comic series Y: The Last Man, which just dropped a brand new bomb on us today -- Barry is being booted, and the leading character of Yorick is being recast yet again. Dammit all to heck and back! Barry got cast in the show back in July of 2018 and I was happy about it -- I loved the comics, and I love Barry. Talent meets talent, what's not to be happy about?

Apparently something. I've been covering the Last Man beat since 2008 and they just cannot get this thing off the ground. They were real close this time -- I think a pilot even got filmed -- and THR says that the latest show-runner Eliza Clark of Animal Kingdom isn't recasting anybody else, everybody else that was on board remains. I don't know if Barry's schedule just got in the way, what with the Marvel Movies and all, or what. All I know is I am sad he won't be my Last Man.
.
Who? Jason Adams When? 3:00 PM