Shia's Pecker Is Of Dire Importance

Sorry, I just read this blurb from Matthew McConaughey on discovering his baby's sex post-delivery:

"I said, 'Come here, little man. I saw the pecker and screamed that we'd been right all along about him being a boy." 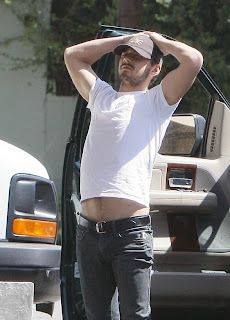 God he's a hick. And now the word "pecker" is stuck in my brain. Pecker this, pecker that. A pecker of pickled peckers. Ahem. So DJ Caruso, the director of the steaming turd that was Disturbia and the Autumn release (and possible steaming turd) Eagle Eye, both starring Shia "The Beef," has his mitts on the adaptation of Brian K. Vaughn's really really great comic-series Y:The Last Man, and spoke recently on where it stands (via DH):

""My agent keeps going 'Oh my god, Warner Bros wants this', which is great" says Caruso who originally setup the project at New Line. Scribe Carl Ellsworth is expected to hand a script into the studio shortly.

The comic told of a young escape artist monkey named Yorick and his pet monkey becoming the last two men on Earth every mammal possessing a Y chromosome dies. With society collapsed, Yorick sets out to find his girlfriend Beth who was on holiday in Australia.

Caruso says that he sees the story as a trilogy with the first movie "basically where you pick up six weeks after the incident then progressing down only a five or six week journey from that point on until the end of the first movie."

Caruso claims the angle with Beth will be downplayed, and their presently working out how the 355/Yorrick relationship will work on screen. He also says that Shia LaBeouf "really wants to do it" and he hopes to start filming on the project in January for release in 2010."

And we're back at this post's title: unless Shia's willing to gift the world with a full-frontal, he can go fuck himself, attaching himself to this project. I know, I know, here I am, the second time within a week spouting off about comic book character's wangs, but as the esteemed Hugh pointed out in the comments of my post on Dr. Manhattan's questionable member, there are two instances of VID (Very Important Dick) that immediately come to mind in comic-book-dom: Dr. Manhattan's in Watchmen and Yorick in Y: The Last Man. Yorick's penis is integral to the entire story, for God's sake! He's the Last Man on Earth. Dick = Important.

So besides the fact that I don't think Shia is right for the part in the first place, if he's not gonna give up the goods - and he seems like he could be the shy type - well, then you just need to step aside, Mr. Beef.
.
Who? Jason Adams When? 9:34 AM