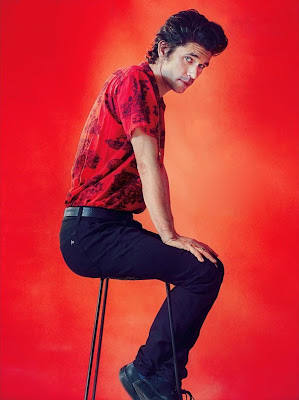 If you are looking for a Big Movie out this weekend you're gonna end up sore -- The Aeronauts is not good, don't see it, read our pal Chris' review at The Film Experience if you need further convincing. Oh and there's Aaron Johnson's Penis in A Million Little Pieces, which is definitely putting the "Big" in "Big Movie," but I already showed you that. That said there are several smaller independent films out today via all of the various platforms that I very much recommend you seeking out, and I shall now list them for you. 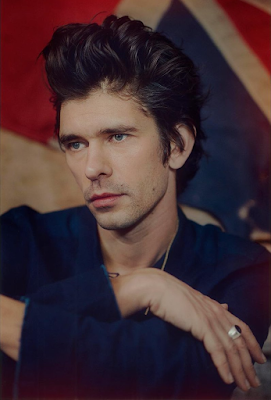 I guess I might as well start with Little Joe, which co-stars our boy Ben Whishaw pictured two times above and which has opened here in NYC at least is at The Quad -- with that title and an openly gay actor you would be forgiven for imagining something about Warhol star Joe Dallesandro, but don't imagine that! You'll be surprised when you actually end up seeing a Body Snatchers riff set in a strange closed-up world of odd botanists fond of rich fabrics. You'll be surprised by Little Joe no matter what you go in expecting, I think -- it's a weird one but I have a fondness for any riff on Body Snatchers and this is the most original one to come along in awhile.
.

MARRY ME BEN IN YOUR MINT GREEN TROUSERS WE COULD BE HAPPY TOGETHER pic.twitter.com/9XSDr3tbMp
— Jason Adams (@JAMNPP) November 8, 2019

.
Moving on I've already told you about twenty-teen times how you need to see Peter Strickland's latest In Fabric, a bifurcated fable about an evil red dress and the bewigged witches who cast spells upon it -- here's my review from Tribeca this past spring, and here's my recent write-up of the performance from one of them witches, which is amazing. In Fabric is playing at Metrograph here in New York, with Strickland there for several Q&As this weekend to boot!

And speaking of crazy stuff I saw at Tribeca another one from that fest this past spring is just now hitting U.S. theaters -- it's called Knives and Skin and here's my review of it -- it's about a teen girl who disappears one night and how her small-knit community deals with it, and if you have any idea how that might play out throw those thoughts right in the garbage can, they are garbage, because this movie is nothing like you imagine it to be.

Lastly but not leastly -- and along with Little Joe I wish I had it in me to write a proper review of this because it's deserving of one, but my brain just isn't really cooperating with me this week -- is the wacko imaginary friend tale Daniel Isn't Here, which stars Miles Robbins as a young man whose repressed id or perhaps his schizophrenia or maybe perhaps even the devil himself springs forth one day in the form of Patrick Schwarzenegger only to then keep finding excuses to take his clothes off. Funny, I have hot dudes who live inside my head who do the same thing constantly too! 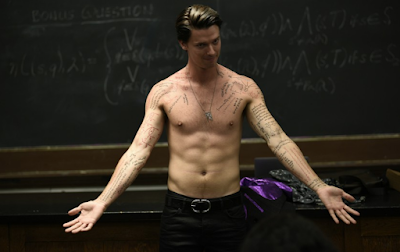 Kidding aside DIR is a pretty fascinating movie with some gorgeous schizoid visuals and some truly ape-shit practical effects (there's one scene that left my jaw hanging on the floor) that's a little undone by a pair of lead performances I found, uhh, underwhelming. Basically I wasn't nuts about what Robbins and Schwarzenegger were serving up. But director Adam Egypt Mortimer has got a great eye and a keen sense of cinematic freak-out which will serve him well if he can line up, uhh, better actors next time around. (There's solid work from Sasha Lane and Mary Stuart Masterson on the sidelines though.)
.

Yes, the rumors are true
PORTRAIT OF A LADY ON FIRE
is fucking breathtaking pic.twitter.com/p0Nn8EiQqA
— Jason Adams (@JAMNPP) December 4, 2019


Oh and the glorious lesbian romance Portrait of a Lady on Fire is apparently playing some theaters his weekend in order to qualify for Oscars -- here's my review of that; it is glorious. The movie, not my review, although who's to judge really? I don't think the movie will get any Oscar nominations since France chose a different movie as their submission for the International prize, but perhaps its breathtaking cinematography can muster a nom. What do I know? Why am I talking Oscars? God. Anyway the film's getting a bigger release come Valentines Day so if you miss it this weekend you'll have another chance then.

The only movies I'm seeing in the theater this weekend are tonight Gabriel Mascaro's Divine Love out of Brazil, which I told you about last week -- it's his long awaited follow-up to Neon Bull, a movie I adored -- and I might see a guild screening of Ford v Ferrari too, if I can muster the energy. I'm really indifferent towards that movie on the surface (cars, blecch), but there's one thing I'm curious about...