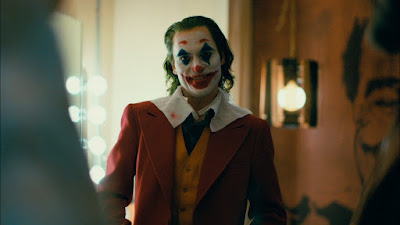 I mean who cleans up the handkerchiefs? Who mops up those custard pie apocalypses? Nobody spares a thought for those hidden doves, tucked into terrible places -- I felt their warm paranoia and their frantic need to burst free watching this movie, jostled up beside a bunch of junk I had no use for. A flaccid juggalo in search of some stiff purpose, Todd Phillips' film weaves and wobbles and flails about, empty as a rabbit-less hat, coarse as a fart gag in an enclosed space. It marinates in flatulent claustrophobia, leaving an unaccounted for stink hanging on us all as we shuffle out mindless, in need of a drink, a moist towelette, a good goddamned book.
.
Who? Jason Adams When? 1:03 PM

I thought it was fantastic.

Lots of people do, Anon! It made a billion dollars.

I think it had a lot to say about systems not adequately supporting people with mental health issues and class, but then threw it all away.

I thought this movie was nothing more than a retched pile of puke, except for the scene where he dances down the stairs.

Todd Phillips clearly watched Taxi Driver and King of Comedy many times. I hope that the people who thought this was a great movie also check out those films. And that they realize what a hollow film The Joker is when compared to them.