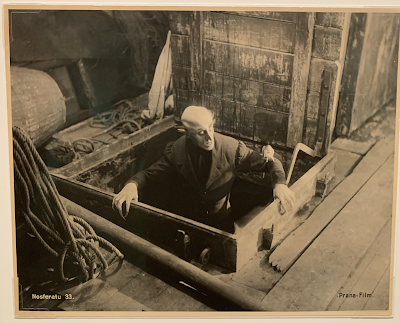 If you follow me on Instagram then you know I spend all my time that's not used up seeing movies hitting up art museums and exhibitions here in New York -- it's my other psycho passion -- and I've got a couple of things to recommend if you're in or coming around this way any time soon. (These are besides that show of hand-drawn 80s action-movie posters from Ghana that I already told you about -- and you can see more pictures from that show, since I've actually been to it since I wrote that post, right here.) First off if you're not aware MoMA just reopened after a massive six months remodeling, adding approximately three billion square miles of space to their galleries... well it's something like that anyway; I've been there three times now since they reopened and I don't think I've come anywhere near seeing everything new. But one thing I have come upon is that they have happily... 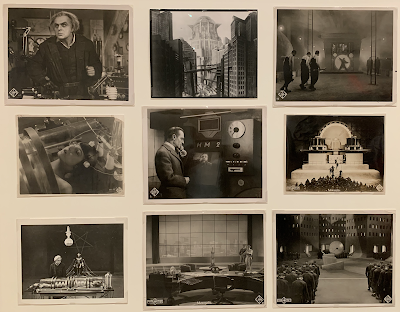 ... integrated film stuffs into the wide collection, instead of keeping it isolated to the lower levels where their screening rooms are, and right now they've got a gorgeous collection of stills from some silent classics on display, including the ones posted above from Nosferatu and Metropolis. (click to embiggen) And speaking of you can also find an original Metropolis poster in one of the galleries, which is really hard not to just start licking, believe you me. Other film stuff on display right now: they're constantly projecting the office scene from Jacques Tati's masterpiece Playtime in one gallery (I keep wishing they'd just project the entire film start to finish, personally, but I guess they don't want layabouts like me camping out all day long) and...

.
The other film-related NYC thing I highly recommend seeking out is only related to film by the artist who made it -- you probably already know that David Lynch is a painter and a sculptor besides being The Greatest Living Film-maker, but maybe you don't know that his stuff is actually fantastic? I love it anyway -- it's as surreal and funny and sweet and terrifying as anything he's ever directed. Well he's got a show up of new works here in New York at the Sperone Westwater Gallery on Bowery -- it's on display until December 21st and you should probably go check it out and be as cool as me is, is my point. But not as cool as my boyfriend is, since that'd just be totally obnoxious...
.

My boyfriend just hung out with this fella tonight without me — anybody got a couch I can sleep on? pic.twitter.com/238wgXcsuS
— Jason Adams (@JAMNPP) November 6, 2019