The Living Shall Be the Best of Eulogies 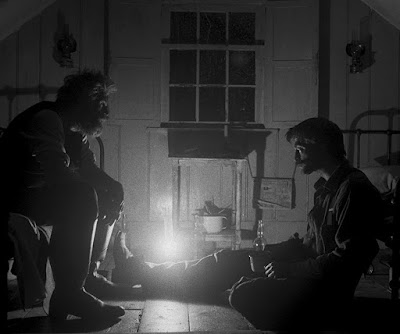 It comes up, deep from the dark places, a baritone sound burbling out of its own recess -- the sound of foghorns and farts and a rattling, last-legs machinery coughing, spitting to a start. It is not my sound but it is a sound that is coming out of my body -- a stolen sound, like Ariel's song from the sea witch, only covered it scales and phlegm green spittle, sparkling little diamonds of oil-slick sea-gunk and barnacles ripped off the rafters of my lungs and blown to the sky.

This is morning, morning in love, a long love of nigh twenty years a day if not, and the sound I am making is a long belch-ish thing -- not quite a belch, but not quite not a belch neither. It's just a sound, a sound I make now, one poised between a satisfied groan and a collapse of the entire system, and it is not mine. It's one I stole from my boyfriend, and it's a sound we both make now. It is both gross and comforting, a stretching of the limbs after a long day and a let loose of one's bowels... in a metaphorical sense of course. Of course.

They say what's mine is his and what's his is mine but you really don't understand the scope of such arrangements until you live with somebody for twenty straight years -- the way you'll realize your head is bobbing as you walk down the street in the manner of a different person -- like the smells, the high curmudgeon stank, that you're lovingly familiar with have been elbow-hard-to-the-table scraped straight out of foreign innards. Like these sounds, these strange sounds, you now know as your own.

There arises a disgusting intimacy from men living together in close quarters for long times -- you scratch my balls, I'll scratch yours; our delicacies scab over with rough dry elbows, with weird bruises you wake up with one day. I don't know whether to punch him in the face or kiss him sometimes, and he me no doubt -- prone to fits that bash things skulls in, he mends my sweaters and tends to the cooking while I scribble nasty things in my diaries and paint my pretty lass face in the mirror. We both get drunk and scream, rinse repeat. I lay my head in his lap and tell him the nightmare I had the night before -- he was in it, he died, I was in it, I died too. Dead together, like living, lasts a long ass time.

I don't know if right now I'm writing about the pervert's paradise that is the movie called The Lighthouse -- the sexiest movie to play in movie theaters since Call Me By Your Name, and just as dripping with fluids -- but I might be, I could be, I am and I am not. Like the version of Persona they screen in Hell, Bergman's light seen from the flip side, Robert Eggers has crafted me and me alone a story I guess I used to carry around in my belly, a gut full of gasoline -- Bob and Bob and Willem flicked a match and burned the bitch up but good. This feels like a finger stuck into my insides, a precious thing smeared in my something or other, lifted up for everybody to see and wonder, a penny, a half farthing's worth.

This here's a love story, a sea glorious love story about men, a love story about men and ritual self-abuse and trying to light a fire with nothing but wet semen, froth and foam. It's about mistaking the male organ for a tentacle storm of Poseidon himself, a black wave so black it becomes white then black again -- about passions churning at the flat sandy bottoms of our souls.

Teeth and blinking eyeballs peek out from under the floorboards, afraid of the light but drawn to it even as it spells doom and sea captains, tossed on the deck in a net of casual indifference -- flop, flop, just another Promethean surf and turfer for the local supermarket. Nobody's romantic worth recalling when the water comes in and cleans the forever stone, fresh skin like a blinding slate. Let loose your noises, your stories and epic poems, his and yours and his now, before somebody sniffs them, sexy dirty laundry turned yellow with time and rot, delicious dirt between your lips.

Just saw Lighthouse last night. I definitely have to see it again in order to pick up more clues...and to bask in the surprising, yet intense homo-eroticism of the movie. On my drive home, I wondered if all the allusions to Greek mythology were red herrings; did the film maker want to explore pseudo-homosexuality, as often happens in prison, under the guise of a beautifully crafted mystery/horror/suspense thriller? Or was it more broad? Was it male intimacy in all of its forms and incarnations? Was this a treatise on human power dynamics? Was it an study of isolation and a resultant descent into madness? Is it all of this and more, making Eggers fairly brilliant?

Did you find score equally brilliant and at times, erotic?
Did you see nods to Kubrick's The Shining? Poe's Telltale Heart?
Did Old Tommy leave the Mermaid statue in a find-able place so as to get Young Tommy's juices flowing early on?
Did Old Tommy make sure they got passed-out drunk on purpose so as to miss the Ferry home? (p.s. the Ferry people don't think to take a look at the premises to make sure no one's dead before peacing out? Makes NO sense to me)
When Young Tommy wakes up after they get blotto, his pants are around his ankles. Does this imply they had a "Boy was I drunk last night!" experience?
Was that Old Tommy's modus operandi? Was he Cosbying young dudes on that Island?
Did it seem like, at time, that Old Tommy and Young Tommy were actually the same person? At times I thought that was going to be the finale... Old Tommy was actually alone the entire time and was coming to terms with all of his youthful sins...

Sorry for the tome... It's been a while since a movie got me thinking so much... Is this what Old Man Scorsese and Pappa Coppola are so hemorrhoidic about lately?

Love your blog to bits!