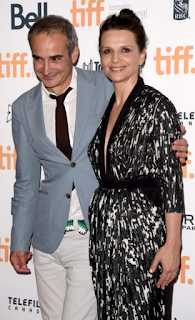 Apparently Olivier Assayas' literature-comedy Non-Ficiton is still coming out somewhere -- the UK, in this instance -- and so he's still giving interviews about it, even though I've already seen his next movie since I saw NF at the New York Film Festival in 2018. For the record I was a fan of Non-Fiction, here's my review. Anyway like I said he's given a new interview on the movie to Little White Lies and they talk a bunch about his relationship to the new media landscape, which is the subject of that film, and I really loved what he had to say about living in a world of "content" that most horrifying word:

"It’s horrifying. The minute people started using the word content, it led to this idea of software versus hardware. The culture has shifted in favour of hardware. People are not on the side of art, which becomes content. They’re on the side of the computer. The computer embodies power. People have gotten used the fact that they are ready to invest in the hardware. They are ready to invest in high-speed internet. They have no problem lining the pocket of some corporate behemoth. But they have a major problem paying very little money to buy a newspaper or a film. That’s the moment when art becomes content.

The scary issue now is that it all becomes about feeding the hardware. Meaning, to generate flux. In the end, in terms of moving images, it becomes the age of the series, because with series, you put the episodes in a pipe and there’s a flow. You only cut off the flow when there’s some industrial logic to it. Movies are the opposite of content or flux. They are singular. They are specific."


This isn't what he was precisely talking about but I think about this a lot when it comes to movies that are genuinely weird or aggressive or actively off-putting to a lot of people -- conversation gets shaped so much these days by box office or awards, by "success" meaning lots and lots of people like something, as if every thing needs to be for every person, appeal to all the quadrants, or it's failed.

This was vaguely what was on my mind when I wrote about my style of review-writing the other week -- I am okay with my writing not being for everybody. It's for me first and foremost, and hopefully if I find the sweet spot making me happy it makes somebody else happy too. That's the best we can hope for. Funny enough it was The Irishman that inspired that train of thought and Scorsese himself has been doing his own battle with the Pop Culture Wolves over Cinema versus Marvel. We're in this together, Marty, Olivier and Me!
.
Who? Jason Adams When? 12:26 PM