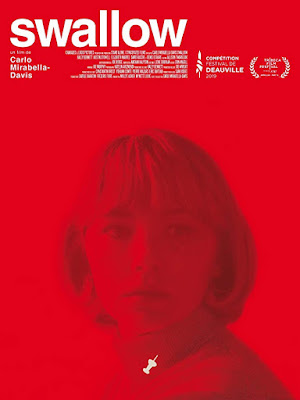 It's the opening day of the Brooklyn Horror Film Festival, 2019 Edition -- a few weeks ago I introduced this year's fest right here; now starts the fun part! I've got a bunch of reviews coming at you over the next several days, as the Fest runs through next Thursday. The highlight for me I'd already seen and reviewed at Tribeca, Carlo Mirabella-Davis' Swallow reviewed here -- that's a new poster above that I would gulp down tacks to have hanging on my own wall. And it looks like there might still be tickets for Swallow when it screens on Saturday -- I can't recommend it highly enough. I mean look how gorgeous it is:

Not that Swallow is anywhere near being the fest's only highlight -- you'll see as we start popping off reviews. The ratio of good stuff I've seen so far is sky-high -- the folks at BHFF do a killer job curating their titles. In particular there's one movie that's been giving me nightmares for days, but we'll get to that soon enough...
.

Ack just watched a screener of something playing at the BROOKLYN HORROR FEST and it was TREMENDOUSLY DISTURBING and my BF is OUT OF TOWN — HOW THE HELL am I supposed to sleep now?
— His Name Was Jason Adams (@JAMNPP) October 6, 2019