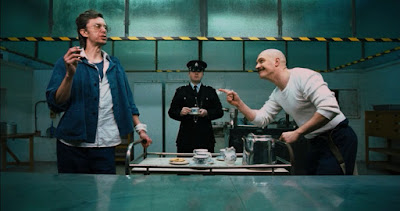 Paul: All you need is a name.
Bronson: What's wrong with Mickey Peterson?
Paul: You need a fighting name, like a movie star.
Bronson: Charlton Heston.
Paul: Look, love. No one gives a toss about Charlton Heston.
The man's a cunt. You're more of the Charles Bronson type.

While I wrote above that Nicolas Winding Refn's Bronson is a 2008 movie it didn't get released here in the United States until 2009 -- October 9th, 2009 to be exact, making today it's 10th anniversary! (Hence this week's banner.) Even though Tom Hardy had been working for years at that point I think like most people who saw Bronson, Bronson was where we first noticed him. I mean...

... I don't just mean all of the gratuitous -- and this movie really puts the gratuitous in gratuitous -- nudity. This is a real whopper of a performance -- a lot of people think it's too over the top but I think it's juuuuuust right. Anyway Hollywood clearly noticed and he was practically charming the trousers off of Joseph Gordon Levitt just a year later with Christopher Nolan's Inception, stealing the entire thing from much bigger movie stars, and making himself one of those movie stars in the process.

A couple of years back when Tom turned 40 I named Bronson as one of my five favorite Tom Hardy performances -- that list remains mostly right on but I haven't seen The Revenant since it came out so I don't know if I'd still include his work in that (although I do remember thinking him by far the best thing about that movie); the work of his that's gone up in my mind in the past two years in Locke, which I think I have maybe undervalued. But my love for Bronson remains rock hard.