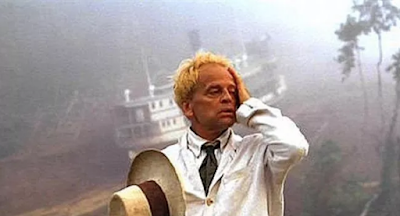 Fitzcarraldo: What's he saying?
Don Aquilino: We must be quiet. He says whoever talks
will be swallowed up the evil spirits of the whirlpool. Shh.

Somehow it being Klaus Kinski's birthday on the same day that The Lighthouse is hitting theaters (read my review here) seems totally and tonally appropriate -- men and madness and all that muck. Werner Herzog totally could have made The Lighthouse with Kinski in Willem Dafoe's role 40 years ago, while I could see Robert Eggers making something like Fitzcarraldo now. In that vein I don't suppose it's a coincidence that Eggers also wanted to re-do Nosferatu! Which reminds me...

... that Lighthouse star Dafoe already played that role in Shadow of the Vampire; do you think Eggers would have -- I hate that I keep talking about his Nosferatu in the past tense but he really did seem to be speaking of it in the past tense when I saw him talk the other day -- cast Dafoe as his own Carpathian Count Orlok? 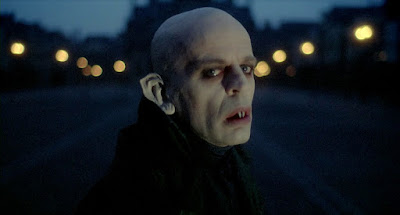 I digress -- Eggers' well-documented obsessions with getting realistic realistic period details, right down to Robert Pattinson really jerking off again, and Herzog's own grueling obsessions that drove his actors and crew to near madness making Fitzcarraldo  and other films -- watch Les Blank's astonishing doc Burden of Dreams as soon as you possibly can -- do seem a neat fit. I'm glad this random confluence of dates made me think of them together.
.
Who? Jason Adams When? 12:10 PM