The first teaser trailer for the BBC's new Dracula miniseries with Claes Bang slipping into the familiar fangs has arrived (we talked about it previously here) and it ends on a deliciously queer note, seen above -- dare we hope we might finally get a proper good and bisexual Count? I mean Drac's always wink wink nudge nudged in that direction but I'd love for the subtext between him and Jonathan Harker to step into the world of forthright text. 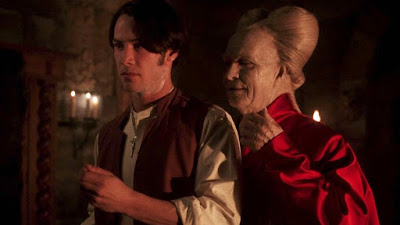 Has anybody gone the distance on this before? Lord knows there are more Dracula properties than one can keep track of -- did the Jonathan Rhys-Meyers series go there? I never watched it -- but I think even Hammer kept the bi-sex mostly of the lesbian vampire sort. That's why the homosexuality in Polanski's Fearless Vampire Killers always still surprises me. Anyway here's the teaser; the series will premiere on BBC this winter and then on Netflix at some point.
.
Who? Jason Adams When? 11:41 AM

In DRACULA: THE MUSICAL from the early 2000s, there's a pretty hot scene of Tom Hewitt chomping on hapless Harker. It got even hotter as its toured around Europe.