When Dern & So's Ruled the Earth 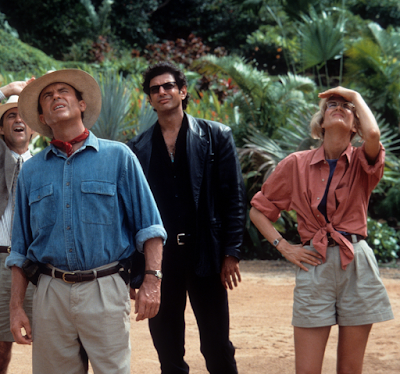 I'd be remiss if I didn't take this brief moment I have to post today to mention today's big big news, since Steven Spielberg's 1993 film Jurassic Park was after all my Star Wars -- that is to say the movie that got Little Jason obsessed with the movies that I went to see a dozen times. That big big news? That the first film's original stars Sam Neill and Laura Dern and Jeff Goldblum will all three be returning to those original roles of Alan Grant and Ellie Sattler and Ian Malcom for the next Jurassic World movie.
.

.
This will be the first time all three will return at once, although they have each played the roles again here and there in the franchise's many sequels. I saw somebody say that upon announcing the news they also said that their characters will have actual things to do and it won't be like the last Jurassic World movie which sold us Jeff Goldblum in the trailers and then gave us like two minutes of him sitting in a courtroom.

We'll see. I haven't liked Colin Trevorrow's Jurassic movies at all, not even that last one that got better notices, so I'm a little wary. But I can't pretend I didn't get goosebumps picturing my trio back together. When I met Laura Dern that one time I embarrassingly gushed about JP at her even though I could've gone into any more respectable corner of her filmography -- it's not like I don't worship her David Lynch work! But Jurassic is my Bible. When I was home a few weeks ago I dug up my box of memorabilia, take a look:
.


Brought my collection of 1993 JURASSIC PARK junk from home — yes indeed that is a 25 year old box of cereal! #jurassicpark #stevenspielberg #dinosaurs #film #moviememorabilia
A post shared by Jason Adams (@jasonaadams) on Aug 27, 2019 at 8:35pm PDT

Have you watched "Jurassic Park III?" It was actually good, not great--and a young Alessandro Nivola played Sam Neill's assistant.