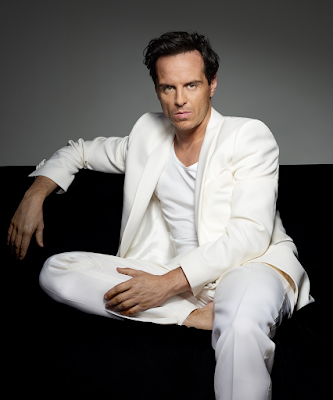 Listen, I have not only known who he is but I have loved Andrew Scott ever since he played Moriarty on Sherlock. But he doesn't seem to have any problem with being called "Hot Priest" thanks to all this Fleabag recognition (he seems more annoyed by "openly gay") and I think it's an adorable moniker, and so I say call him "Hot Priest" if you wanna call him "Hot Priest." I mean maybe don't call him "Hot Priest" two years from now, but Fleabag Fever is still a thing, it just won all the Emmys, so we're allowed. (This is in response to all sort of people on Twitter being pissy about calling him that, by the way. Just don't such miserable scolds, I says.) Anyway...
.

.
... the point is that the openly gay Andrew Scott aka Hot Priest has just signed on to play Tom Ripley in a Showtime adaptation of Patricia Highsmith's Ripley books -- specifically of The Talented Mr Ripley, it seems -- and I say bring that the heck on. I love Minghella's film as much as the next guy but if they can make a new West Side Story with racially appropriate actors then we can get a Tom Ripley who's actually had a dick in his mouth. Now y'all do some dream casting in the comments! Who should play Dickie, and Marge, and Dickie, and Freddie, and Dickie...

Last Christmas in London, I saw a play about Patricia Highsmith entitled Switzerland. Phyllis Logan, who plays Mrs. Hughes on Downton Abbey played the author of this two-hander. The other character was a representative of her literary agency who morphed into Tom Ripley. I think they should film that and add it to this miniseries!

LOL I almost made that recommendation, Anon -- as seen in the trailer for his Pope show Jude Law is still entirely fuckable and desirous

Well, I know I suggest him for everything, but Matthew Goode would make an alluring Dickie. Tom Cullen might also work, though he's a bit young.

Why are we even discussing anyone for Dickie besides Armie Hammer?

Plus, than Timothee can play Marge.

I'm with ferretrick - Armie Hammer for Dickie! But if not him - well depends where you want to go age/nationality-wise. I could see Nikolaj Coester-Waldau, Dan Stevens, Garrett Hedlund, and Douglas Booth all working. To me, Marge seems like it's screaming out for Debicki. As to Freddie, there are so many ways you could go, but my first thoughts are Sam Claflin and Ben Schnetzer.

Not entirely related to this discussion, but I recently became aware that this was the cover of the first edition of one of the later Ripley books:
https://upload.wikimedia.org/wikipedia/en/c/c2/PatriciaHighsmith_TheBoyWhoFollowedRipley.jpg

Oh, Douglas Booth is a great choice. He was perfect as the same type of character in And Then There Were None.

Colin Morgan for freddie or Josh O'occor/Tom Hughes. Dickie...I just want Sam Reid to be in everything already! also in a perfect world Michael Fassbender or Jude. Tom Hardy or Hiddleston could do it too if their not too busy being big stars although Scott's suggestions are great. It will probably be Sam Claflin or James Norton.