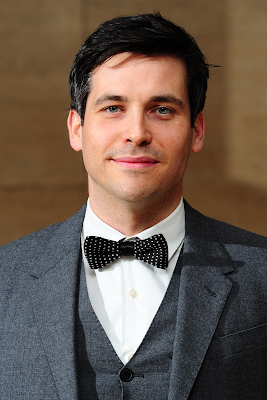 No I don't entirely know what this post's title means; it just made me laugh so go with it. Anyway I'm surprised by how much I want to see the Downton Abbey movie, out in theaters today -- I know I want to see it both because I'm very annoyed I haven't gotten to see it already and because looking at my calendar for the next couple of weeks I've no idea when I will be able to fit it in and that's even extra annoying. Woe is moi. I'm surprised because I had to bail on Downton about halfway through the series, it'd gotten too redundant for me with its soapiness. And yet a two-hour event movie, as a way to revisit with old friends, it sounds real comforting. Also, there's supposedly gay stuff.
.

.
We knew there would be when they released those trailers, which I covered here, and they flashed us some sweet "Thomas the Footman" kissy kissy action (Oh how we love thee, Rob James-Collier) but it's good to have confirmation of said stuffs. Hey remember this? 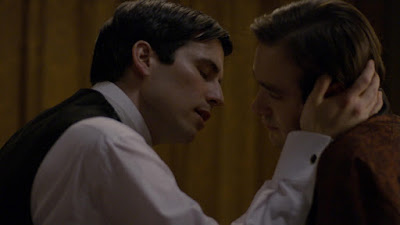 I'm still annoyed they never brought Charlie Cox back. Anyway this is my call to y'all -- if and when you see the Downton movie do share your thoughts in the comments! Without getting too spoilery, I mean. I mean it's a soap so I don't entirely care what happens, I'm going for the costumes and pomp and gay kisses -- it's not like I'm not terribly emotionally invested in any of it.


Here is just a picture of Rob James-Collier at the #DowntonAbbey premiere, just that nothing else pic.twitter.com/ZcoSe0dR7C
— Jason Adams (@JAMNPP) September 20, 2019

Costumes, pomp, and gay kisses. That about sums it up. Oh, and a hunky plumber. And Imelda Staunton.

I always hated how in the series the rest of the household staff sort of had a "shrug the shoulders" that's who Thomas is mentality in regards to his homosexuality. There's no way in the early 20th century, they would have taken such a "woke" stance.

The film is ... well, imagine someone gave an AI a word processor and a $15 million costume budget.

Also, Rob James-Collier is 43. Just leaving that there.

Absolutely Love Downton. Loved the movie. Really enjoyed being there again and basking in the glow.

The movie is fan service, 100%. If you loved the series, you will love it. I did. I can't say where you'd end up-if you were bored midway through, you might still be bored, or enough time might have passed that you will love it again. But it's just Downton as it always was, with a bigger budget and Imelda Staunton. Maggie Smith and Penelope Wilton are still the best and bitchiest frenemies, Allen Leech still manages to make his wet dishrag character hot AF, and the servants still save the day while the rich people really have no idea what's going on. Other than a fabulous camera sweep in shot of the house at the beginning of the film, it's just an extra long episode of the series.

Unfortunately, the gay plot is actually one of the more problematic aspects of the film, and the example of what was always most offensive about Downton...SPOILER SPACE:


Tom get a bit of romance yes, but what happens is that, while waiting for the love interest who happens to work for Buckingham palace, another guy picks him up and takes him to a 20s underground gay bar. Rob James Collier does lovely work showing the experience most of us had the first time we stepped into a gay bar and discovered other people like ourselves being themselves without fear. But then 10 minutes later, the problems come. The bar is raided and Thomas and everyone else is hauled off to prison in a genuinely harrowing sequence. But then-as always on Downton, the problem is resolved in 10 minutes when Buckingham Palace guy uses his clout to rescue Thomas from jail and hush the whole thing up. And because the character we know and care about is now ok, neither we nor the film have to think about all the other poor schlubs who got hauled away and may be facing the loss of jobs, prison, etc. and do any serious exploration of the societal problems of the era.