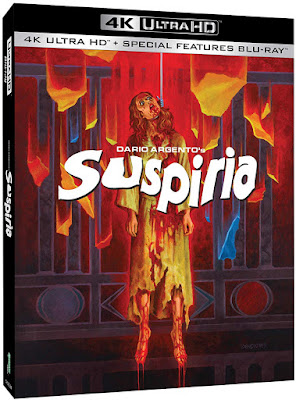 Last year an absolutely stunning 4K restoration of Dario Argento's 1977 classic horror flick Suspiria made the rounds in movie theaters -- I was fortunate enough to witness its spectacle and wrote a brief bit about it here. Well they're finally putting the thing onto blu-ray on November 19th -- too late for Halloween alas, but with something this gorgeous every day can be Halloween! It's not cheap, costing $60 even discounted at Amazon -- and some of us, cough me cough, already own like ten versions of Suspiria on blu-ray -- but they do promise a ton of brand new extra features, even beyond the never-looked-better restoration, and I'll share them after the jump...

Jessica Harper (PHANTOM OF THE PARADISE, PENNIES FROM HEAVEN) stars in this frightening tale of a young student who uncovers dark and horrific secrets within the walls of a famous German dance academy. What spirals out from that simple premise is one of the most powerful and hallucinatory nightmares ever captured on celluloid! Dario Argento's SUSPIRIA comes to home video from Synapse Films in an exclusive new 4K restoration from the original uncut, uncensored 35mm Italian camera negative, with the original theatrical 4.0 English surround sound mix. Synapse Films' beautifully restored version of Dario Argento's SUSPIRIA was completed with the supervision and approval of the film's Director of Photography, Luciano Tovoli. Now available for the FIRST TIME EVER on home video in a true 2160p 4K presentation with High Dynamic Range and a new Dolby Atmos remix!
Special Features:
A new 4K restoration of the original uncut, uncensored Italian 35mm camera negative exclusively done by Synapse Films, with color correction supervised and approved by SUSPIRIA Director of Photography, Luciano Tovoli.
Original 4.0 1977 English language LCRS sound mix not heard since the theatrical release in 1977, presented in high-resolution DTS-HD MA 96kHz/24-bit audio, with newly translated removable English SDH subtitles.
All-new Dolby Atmos Remix and High Dynamic Range Presentation.
Italian 5.1 surround mix, with removable English subtitle translation.
Two audio commentaries by authors and Argento scholars, Derek Botelho, David Del Valle and Troy Howarth.
Do You Know Anything About Witches? - 30 minute SUSPIRIA visual essay written, edited and narrated by Michael Mackenzie.
Suzy in Nazi Germany - Featurette on the German locations from SUSPIRIA.
A Sigh from the Depths: 40 Years of SUSPIRIA - All-new anniversary retrospective on the making of the film and its influence on cinema.
Olga's Story - Interview with star Barbara Magnolfi.
Original theatrical trailers, TV spots and radio spots.
"International Classics" English "Breathing Letters" opening credit sequence from the U.S. release.
Alternate all-English opening and closing credits sequences, playable via seamless branching.
Reversible cover art by Wes Benscoter.
.
Who? Jason Adams When? 11:09 AM