Learning to Speak in Sarsgaard 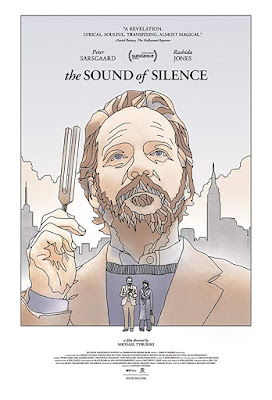 I very much wish I could've found time to re-see The Sound of Silence before it properly hit theaters today -- I saw the movie, which has Peter Sarsgaard playing a man who tunes urban sounds for agitated city folk a la feng shui, at BAM's annual CinemaFest series in June and I liked it a whole lot. I specifically recall there being a moment of absolute transcendance in the last act, something that felt like a gift to anyone who loves this city of New York that I so love. Here's the trailer:
.


.
Anyway for whatever reason I didn't write a real review of the movie when I did see it then, and now it's too distant in my memory to do it the sort of justice I'd like to. But the feeling of vague positivity that greets me thinking upon the film seems like enough of a recommendation, I think -- we should all see the movie now, this weekend, is what I'm saying. And now I will share with you some photos and video of star Peter Sarsgaard with the film's writer and director at BAM all those months ago:
.


Peter Sarsgaard and his THE SOUND OF SILENCE producer + director at #BAMCinemaFest — make sure you watch the video of Peter displaying the pure projecting power of his voice when asked about what drew him to the role of a man obsessed with sound #petersarsgaard #film #thesoundofsilence #michaeltyburski
A post shared by Jason Adams (@jasonaadams) on Jun 14, 2019 at 8:06pm PDT