Netflix Is Coming For Your Kids This October 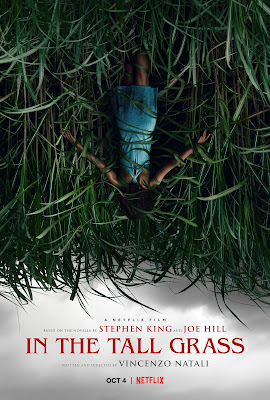 Netflix has released the first disorienting poster (above) and the first image (below) from Vincenzo Natali's forthcoming horror flick In the Tall Grass, which is adapted from a short story by Stephen King and his son Joe Hill. And they're also letting us know the movie will hit Netflix on October 4th -- that's only 21 damn days from now, holy crap! And we've been posting about this one forever -- well since 2015 anyway, which is "forever" now. The film is about two little kids who get lured into a field by the sound of a crying boy, which turns out to be a trap of some sort. I never read the story, but somebody in this will be played by Patrick Wilson so I'm there. 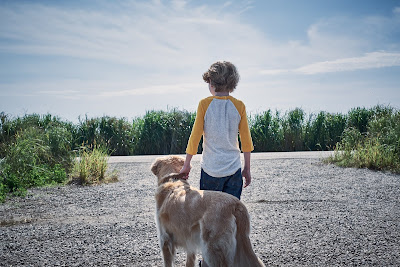 Netflix is doing us all a big scary favor this holiday season though -- they're releasing a brand new horror flick every single week in October! They're calling it "Netflix and Chills" and ITTG is just the first thing on the menu -- October 11th will bring us Fractured with Sam Worthington and Lily Rabe as parents who take their injured daughter to an emergency room that turns into a nightmare. Most excitingly Fractured was directed by Brad Anderson, the great director of Session 9 and The Machinist.

Then October 18th brings us Eli, the latest scare flick from Citadel and Sinister 2 director Ciarán Foy starring Max Martini and Kelly Reilly as the parents of a dying child who put their faith in a doctor (played by Lili Taylor) with an experimental program that leads to, well, happenings. And finally come October 25th we get Rattlesnake, which stars the always welcome Carmen Egojo as a mother whose kid is bitten by that thing in the title and who's then forced to make a deal with the devil (not sure if that's literal or not!) to save her. Anyway here's a trailer for the whole shebang which gives us first glimpses of every one of those titles:
.

.
Kinda funny how every one of those is about putting kids
in danger, right? Not really "funny ha ha," though. Just... funny. 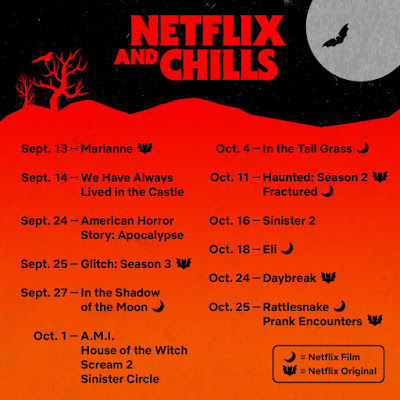