I Have Never Felt More Seen... 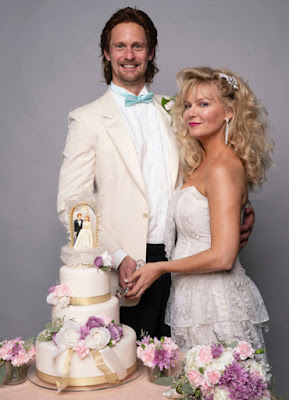 ... than when they showed Ernie's son dancing to Paula Abdul
in his room in On Becoming a God in Central Florida.

That moment hit harder than anything in Call Me By Your Name, even -- this was like somebody had actually hidden a video camera in my bedroom in 1992 and saved the footage for twenty-five years. Although I grew up in upstate New York I have a feeling a lot of this show's going to feel that way -- these people are kinda my people, more or less. Just slide in Jesus in place of their Get Rich schemes -- a surprisingly simple swap, that! -- and you've got me and MC Skat Kat not knowing what was about to hit us.

A significant shout-out to Théodore Pellerin seen there tighty-whiteying it in a pool in the pilot episode -- last seen by me getting frisky with Lucas Hedges in Boy Erased he's certainly making a name for himself, isn't he? He's very funny on the show -- standing out against Kirsten Dunst, Notorious Genius, isn't easy pickings, but he's managed for sure.

I mean obviously the tighty-whities grabbed my immediate attention, but he's kept it since then, not a tighty nor a whitey anywhere in sight(y). Aaaanyway are we all watching slash enjoying the show? And as I asked on Twitter, most importantly of all...
.

Have we decided what we’re abbreviating ON BECOMING A GOD IN CENTRAL FLORIDA to? Cuz I’m not saying that shit (and by shit I mean delightfully evocative title) every single time
— Jason Adams (@JAMNPP) September 3, 2019