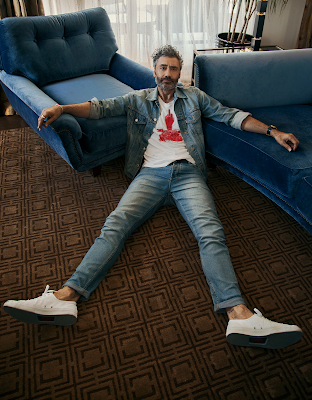 I came very close to posting yesterday's abbreviated Taika Waititi news -- that he is going to quick direct a small mystery movie this fall before he dives back into directing the new Thor next year -- even though we didn't have any more information of substance than that, just because hey, opportunity to post a Taika Waititi picture. Who doesn't want that? But I guess it's a good thing I waited a minute because this morning we've already got the word on what the mystery project is going to be.

He turning the 2014 soccer doc Next Goal Wins, which is about a Dutch soccer coach (seen here, if you wanna cast the role) attempting "the nearly impossible task of turning the American Samoa soccer team from perennial losers into winners." So a feel good sports movie (and one starring Polynesian actors to boot) -- this sounds so entirely up his alley I can't wait. Tack on the fact that Taika doesn't seem like the type to be prudish about locker-room scenes (he knows beefcake has its own audience, see below) and I'm officially excited about a sports movie!

Wonder if KJ Apa will be considered. He's half Samoan and certainly has a soccer bod. And think about those locker room scenes.

For the casting of the coach, Thomas Rongen, I'd go Hugh Laurie or Kenneth Branagh or Bryan Cranston. All in the same age range and kinda could look like him (not so much in the pic you linked tho) and can act in the tone Taika movies usually are.

About KJ Apa, no. No. He doesn't look remotely like the actual samoan players, in any way. They weren't athletic and they were all brown, and that's integral to their story.

So redirect the thirst to Riverdale or somewhere.