Dominika: I think one day you will understand.
Nate Nash: No, I don't think I will. Some things
can't be sacrificed. We don't throw people away.

I think I'm one of about ten people in the entire world who totally enjoyed the ridiculous spy fest Red Sparrow, but then I did have an awful obnoxious father with his teen girls sitting next to me and watching his world crumble as he realized this Jennifer Lawrence vehicle, full of rape and nudity and murder, was not the latest Hunger Games movie, well, that was a lot of entertainment value in itself. Funny how vividly I can recall that entire experience today! Twas a delight.

Anyway as Mr. Nate Nash just said we don't throw people away, so -- where the heck are you, Jennifer Lawrence? The Oscar winning actress has only been seen scowling her way though Dark Phoenix under several pounds of Smurf make-up this year -- I keep asking where her X-costar Michael Fassbender's gotten himself to, I feel I should flip the script, ask about Jen here on her 29th birthday. We loved mother!, Jen! 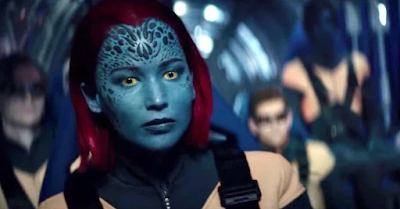 Of course she's not really going anywhere and those of us who do like her really have nothing to worry about -- she remains a massive movie star, where Fassy's still, even with those Mutant Movies on his resume, considered a Thespian, a designation that's way more disposable in this disposable day and age than an honest to goodness movie star. Jen's got three projects lined up -- the bio-pic of psycho pretrendress Elizabeth Holmes should make for good cinema (until you see it's Vice director Adam McKay who's directing, true and total barf)...
.

... but it's her Married-to-the-Mob-esque movie Mob Girl with The Great Beauty and The Young Pope genius Paolo Sorrentino that I'm most curious about. It's based on the 1992 book about real-life moll Arlyne Brickman, who ran with the Colombo crime family in the 50s and 60s and eventually turned FBI informant when the thugs threatened her daughter. It sounds like a great story, and seeing Sorrentino turn his eye on the typical Scorsese Territory of mid-century New York gangsters could really be something.
.
Who? Jason Adams When? 11:15 AM