Little Bird's Fallen Out of That Nest Now 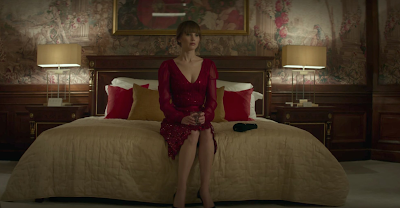 It's possible that I got some of my enjoyment from watching the father of three teen girls who was sitting in front of me (who I already hated because I'd gotten into an argument with him about his phone at the start) become steadily more horrified and embarrassed about the movie he had brought his little girls to - nope, this ain't the new Hunger Games, dude! But I sure do have to say I did have a good time with Red Sparrow last night. He was trying to grow a third hand with which to shield each of his kid's eyes while I got to guffaw behind him at Jennifer Lawrence barking "You sent me to Whore School!" at Matthias Schoenaerts. A perfect night on the town.

In all seriousness Red Sparrow reads like a fabulously dark companion piece to Atomic Blonde to me - the latter film trades sometimes too hard in the fun of its implausible and sexy ass-kicking fantasia; for all of the astonishing brutality that is heaped upon Charlize Theron her character still reads as an Ice Queen Terminator, unstoppable in her fashionable high-kicks and slouch-shouldered sweater sets. Red Sparrow meanwhile, while also a great big heaping over-the-top movie thing, reads more honest to me in the ways a female spy would really have to maneuver through the world... ways that are indeed hella depressing and disturbing.

The Hitchcockian score only underlines that Red Sparrow is intended as a modern-day Notorious - where Hitch could only hint at the bedroom seductions and compromises that Ingrid Bergman was being forced to surrender herself to all in the name of "patriotism" Red Sparrow goes full force De Palma with it, pouring magnificent Euro-sleaze over top of everything that Hitchcock could only suggest. So yes there is rape and sexual humiliation and yes it is at times very hard to watch. But I don't disbelieve the truth of that. Not even a smidge. Our governments, ones of every stripe, trade in our humanity every second of every day, churning us through the meat grinder in the name of God and Country (and Men). Red Sparrow makes a helluva Movie out of it. Beautiful and brutal and silly and stomach-churning all at once.