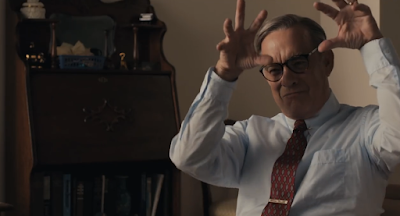 No, you're the one crying at the trailer for the Mr. Rogers movie! Okay okay fine it's me, it's me, I'm crying at the Mr. Rogers movie trailer. But maybe you will prove yourself not at all the heartless cretin I think of you as, and you will be crying too after watching it below. A Beautiful Day in the Neighborhood is the new flick from Marielle Heller, two astonishing films (Diary of a Teenage Girl and Can You Ever Forgive Me?) at her back, and of course stars Tom Hanks (who else) as Fred Rogers American Hero, and also Matthew Rhys as a journalist who's covering the man who made the land of make-believe so very real. 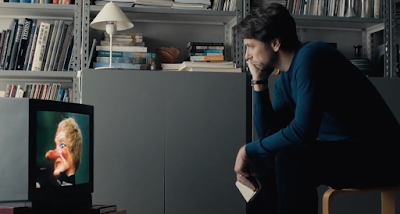 Actually really as we were clued in by Heller herself at a talk at this past spring's Tribeca Film Festival the movie is much more about Rhys' character, which is probably smart -- you need a protagonist with an arc, some foundering, and Mr. Rogers, for all his wonder, was wondrous because of his steadfast lifelong decency. That's good for mankind but not so good for storytelling. Anyway this movie ranked as one of my most anticipated for the rest of the year, and here's that trailer...
.


.
ABDITN is out at Thanksgiving time, just in time to finally
get Marielle Heller her goddamned overdue Oscar nomination.
.
Who? Jason Adams When? 12:15 PM