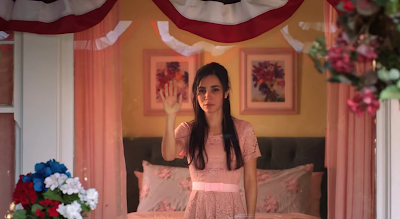 Director Gigi Saul Guerrero's film Culture Shock, the latest feature-length movie-episode of Blumhouse's "Into the Dark" horror anthology (which also included Sofia Takal's terrific New Year, New You, which I reviewed here) was written specifically to bait those of us reviewing it into writing the sentence, "The American Dream has become The American Nightmare!!!" With three, yes exactly three, exclamation points, just like that. But you know what? The American Dream has become the American Nightmare (for some of us it always was), it's earned every one of those exclamation points, and so have at it, Culture Shock -- bait us towards the truth.

Marisol (a very fine Martha Higareda) is trapped in a dreary and desperate life in Mexico. She's about to give birth to the baby of a man she'd trusted who'd raped and abandoned her in the wilderness as they'd tried to cross the border illegally -- Marisol has set her mind on crossing again though, both for a better life for her baby and to possibly maybe catch up with that asshole and get herself some revenge. Crossing the border in her state though, it's a matter of will over sanity, and Culture Shock delights in showing us this woman's steelier than any of these men thought possible.

Everything goes wrong, as it must, and the land of milk and honey America promises turns to, as the great Kristen Dunst once put it, ashes in her mouth -- if Guerrero's vision of the pastel candyland north of the border that's way too good to be true sometimes feels cribbed from other sources (I kept thinking of the similarly terrifying "Harmony Hut" in Addams Family Values) it remains unsettling, and Guerrero's satire of American Values (gamely met by the crazed glare of the always welcome Barbara Crampton, pushing blonde can-do to its surreal extreme) Gone Uncanny Valley is thrillingly lensed; the perfect antidote to the dystopian Iñárrituan vérité of the opening scenes.

I also kept thinking of Joe Dante's knife-sharp 2005 zombie war satire Homecoming, which was part of (and a real highlight from) the Masters of Horror anthology series, which is a real compliment to Culture Shock if you ask me -- both can be described as defiantly political Twilight Zone episodes, where the small stature of the platform has given smart storytellers the means to get a message out that would've been ground up otherwise, using genre to its best potential. Culture Shock is a necessarily unflattering snapshot of our shit-show times, vital as the fluids it leaves sprayed across the floor. 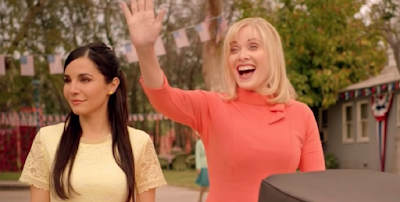 PS Culture Shock is already streaming on Hulu,
you can watch it there at this link.
.
Who? Jason Adams When? 12:50 PM