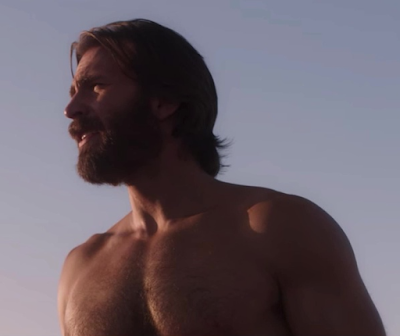 Red alert, or whatever -- Netflix's Red Sea Diving Resort movie, starring Chris Evans and Michiel Huisman and Alessandro Nivola as a group of Israeli agents trying to smuggle Somali refugees to safety, is out on Netflix today. Watch it here. And for lots more from me on the subject of this film, i.e. lots of pictures and screaming about these actors being spectacular visions of manliness... 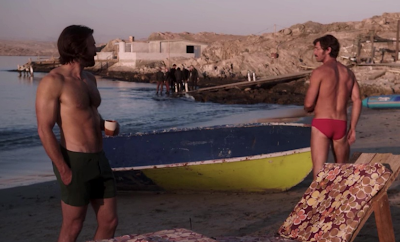 ... well you can go right ahead and click through our archives. I haven't been able to watch it myself yet, and I probably won't be able to until this weekend, but uhh....
.

I know not many of us have had the chance to watch RED SEA DIVING RESORT yet because it just dropped, but this gif of NAKED MICHIEL HUISMAN HUGGING CHRIS EVANS isn't a spoiler, just a reminder -- GOT ON THAT SHIT, YO #RedSeaDivingResort pic.twitter.com/OIfvFo6m5U
— Jason Adams (@JAMNPP) July 31, 2019

Jesus fucking Christ, that is saddest, flattest ass I've ever seen. It's like a straight drop from his back to his legs. It's like his ass was somehow subtracted from his being. This hurts me spiritually.