Strip Nude For Your Forbidden Photos 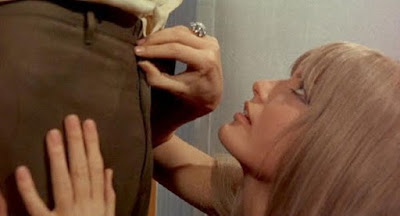 Glorious news for horror-loving New Yorkers who'll want to burrow inside something cool and groovy to escape the July heat -- the Quad Cinema is screening six restored giallo films from July 19th through 25th and they're some real doozies! A couple of which I have covered here at MNPP before, like just recently The Fifth Cord starring a spectacularly mustachioed Franco Nero...

... more than just a mustache ride though this film is truly gorgeous to gaze upon, having been lensed by Vittorio Storaro right in between The Conformist and Last Tango in Paris. This sucker will look absolutely smashing on a big screen. Another one they're showing is the delightfully loopy and odd The Forbidden Photos of a Lady Above Suspicion, which I posted about right here...

... it's got pleather costumes and sheer walls and scuba men and pills, so many pills. It's a ton of fun. And as if that wasn't already enough they're screening 1975's Strip Nude For Your Killer, which might be my favorite giallo title of them all, and which stars (and gratuitously exploits over and over) the gorgeous Nino Castelnuovo of The Umbrellas of Cherbourg fame...

... and yes he spends half the movie half-naked, as we previously well documented in this old post here. Look upon that gif above and tell me you don't need to see that on a big screen! If you're not in New York all three of those films have been released on blu-ray recently, which is what got me to post about them at the time; click their titles to pick up a copy. Really you ought to do that even if you do live in New York, they're all worth owning. 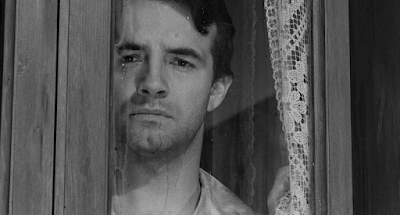 Those three aren't the only films they're screening though, there are three more (including a Fulci) that I've never seen,  and if you hit the jump I'll share the info on all six of the films...

The Forbidden Photos of a Lady Above Suspicion
Luciano Ercoli, 1970, Italy/Spain, 96m, DCP
Peripatetic Spanish character actor Simón Andreu, in the first of three consecutive movies for director/producer/editor Ercoli, is the blackmailer holding the titular compromising shots over the head of newly-wed Dagmar Lassander (A Hatchet for the Honeymoon). Is her BFF Nieves Navarro (Ercoli’s off-screen leading lady, billed on-screen as Susan Scott) in on the sleazy scheming? Co-scripted by the prolific Ernesto Gastaldi (Torso et al.) and the film’s female assistant director, Mahnahén Velasco, with a score by the never-less-than-great Ennio Morricone. In Italian with English subtitles

The Iguana with the Tongue of Fire
Riccardo Freda, 1970
Giallo alights in greener pastures (Ireland!) but the blood still runs red for this utterly gnarled tale of family secrets and deadly lies. After a young woman’s ghastly slaying, Dublin cop Luigi Pistilli (of Sergio Leone’s Clint Eastwood movies) tries to rattle skeletons in the closet of possibly implicated diplomat Anton Diffring—but much more comes tumbling out as the bodies pile up. With Valentina Cortese (Day for Night) and Dagmar Lassander as mother and daughter. In Italian with English subtitles

One on Top of the Other (aka Perversion Story)
Lucio Fulci, 1969
This rare U.S.-lensed giallo includes San Francisco settings and less violence than the norm, strengthening the story’s nods to Vertigo. Is head-turning stripper Marisa Mell the woman she appears to be, or is she the thought-to-be-dead mousy wife of doctor Jean Sorel? His mistress Elsa Martinelli, his sister-in-law Faith Domergue (once groomed for stardom by Howard Hughes), and detective John Ireland want to know. Scored by Riz Ortolani.

The Possessed
Luigi Bazzoni/Franco Rossellini, 1965
This striking psychological thriller perches equidistant between Antonioni-influenced art cinema and the giallo wave, inspired by a real-life mystery and evocatively lensed in black-and-white by cinematographer Leonida Barboni. When Peter Baldwin’s romantic obsession Virna Lisi dies under cloudy circumstances, his quest for answers in her home village is met with cold shoulders and outright fear. Featuring future journalist and critic Pia Lindstrom, in a rare acting role. In Italian with English subtitles

Strip Nude for Your Killer
Andrea Bianchi, 1975
Bianchi (Cry of a Prostitute) marinates in ’70s loucheness with giallo supernova Edwige Fenech; she works and plays with shutterbug Nino Castelnuovo at queen bee Amanda’s modeling agency, where just about everyone is glamorous. When a switchblade-wielding, black leather-clad killer starts cutting a swath through the agency’s portfolio, the audience is left to guess who’s the prime suspect and who’s the next unwilling victim. The score is by Berto Pisano (Death Smiles on a Murderer). In Italian with English subtitles 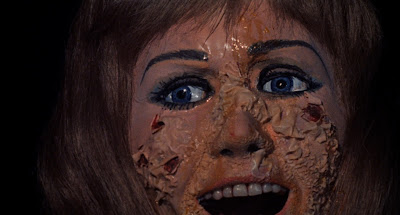 This all sounds so great! And hello, Mr. Castelnuovo.

Which movie is that first image from?

Anon -- that is supposedly from "One on Top of the Other (aka Perversion Story)" although I haven't seen that one so I am relying on google to be correct :)