And he is naked in it a lot, not just there upside down against bookshelves (be still my loins) but all over the thing, with that super duper extra special layer of 70s giallo sleaze and sweat and semen poured over every single frame.

Good grief. The entire movie is up on YouTube (you can watch that below but it was also released on blu-ray a couple of years ago and I think I'm going to order a copy and watch it in better quality -- so should you!) and I had to work really very hard to stop myself from skimming through the entire thing lest I spoil its every surprise.

I mean even besides all the naked Nino (as if you can just set that to the side) just read the insane (insanely incredible) plot description from the film's IMDb page:

"When a fashion model dies during an abortion, a series of murders begins, starting with her doctor. The next victims are connected to the modeling agency where she worked, Albatross, run by a hard edged and jealous bi-sexual, Gisella, married to a Farouk-like dissolute. One suspect is Carlo, a playboy photographer who has a hot temper and refuses to share information with the police. He becomes the lover of Magda, another photographer at the agency, who's probably in danger. The murderer wears a black motorcycle outfit and helmet. Will anyone discover the murderer's identity before the entire agency dies?"

The 70s were the greatest time
in all of recorded human history.

Looks like Nino agrees! So anyway like I said I had to quit skimming it before I ruined the whole thing for myself but I did make a few gifs from what I did watch and you can see them (and the lo-fi YouTube copy of the entire film) after the jump... 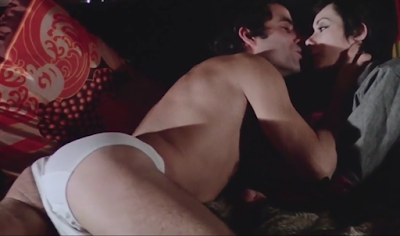 Thanks for the recommendation. I fell in love with Nino Castelnuovo when I saw The Umbrellas of Cherbourg

Adrian Mendoza said...
This comment has been removed by the author.
9:26 PM