Gaily Through the Looking Glass 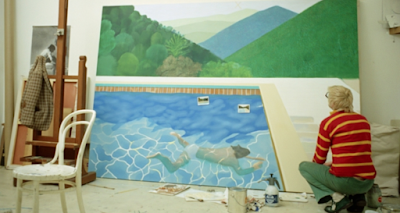 If you could walk into any painter's paintings whose would you walk into? My favorite painter Francis Bacon would be too much ("Oh no my face is meat now!") but since I do like a bit of madness iI'd probably go for another surrealist, somebody like Magritte, although it'd be annoying to have that damn green apple stuck to my face all the time, I will admit. But it wouldn't be too shabby to walk into the paintings of David Hockney -- nothing but good sturdy men taking showers and swimming naked in the flat California sunshine? Not too shabby.

A Bigger Splash, the way before its time 1973 half-doc half-not-doc -- or as the press notes call it "an improvisatory narrative-nonfiction hybrid" -- does a better job of realizing that "climb inside a painting" dream than a flick like the Robin Williams vehicle What Dream May Come ever did, probably because filmmaker Jack Hazan had access to Hockney for one, who plays himself and even more feels himself, of himself -- Hockney is a show-off, and I don't just mean in the sense that he pulls down his underwear and struts around cock forward. 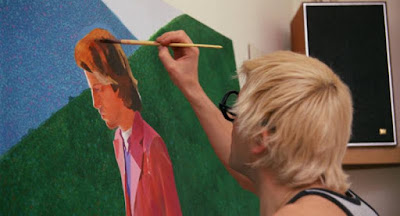 When I look at Hockney's paintings I've never felt a great sense of mystery -- that California sunshine stamps out the shadows and the pleasure of his images, for me anyway, has always been in their directness. His subjects usually stare right at the viewer, and when something's gay it's gay -- there's no skirting around it; no Warholian irony anywhere.

Hazan captures that essence and then some. More than simply walking into Hockney's paintings -- although there are, as there should be with a painter this forward, moments where exactly that occurs and we watch his canvas brought to motion before us, rippling pool tops and splashing bare asses in the sun -- the paintings surround us, the sense of Hockney's being surrounds us. His wit, his level sensuous gaze. A Bigger Splash feels, in its end, a definitive statement of this particular artists's self, which is just about the best compliment any doc-not-doc, or improvisatory narrative-nonfiction hybrid, can attest to. Bravo.
.
.
A brand new stunning 4K restoration of A Bigger Splash is opening here in New York at the Metrograph this Friday, and will spread out across the country from there and then.
.
Who? Jason Adams When? 1:22 PM

In the 1980s, I worked at Walker Art Center and David Hockney was in residence for his exhibit, Hockney Paints the Stage. He was one of the nicest people I've ever met, and through him, I met Henry Geldshaler and a few other people who were the subject of his paintings. I wish his hearing hadn't gotten so bad, but that's a part of his life, too.

Oh that's so nice to hear -- he comes off as really genuine and funny and smart in this movie; I've never wanted to hang out with Andy Warhol but I'd totally want to hang out with Hockney; he seems like he gets it.