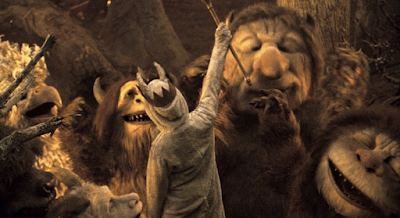 MaMax: Small is good. My powers are able
to slip right through the cracks.
Judith: But what if the cracks are closed up?
Max: Then I have a re-cracker,
which goes right through that.
Judith: But what if they have some sort of material
that re-crackers can't get through?
Max: Then I have a double re-cracker, which can
get through anything in this whole universe.
And that's the end, and there's nothing
more powerful after that, ever. Period.
Alexander: He has a double re-cracker.
Ira: He does sound powerful.

A very happy 22 to the actor Max Records, who gave a beautiful performance as the lead of Spike Jonze's beautiful film, actually my favorite movie of 2009 -- holy hell can you believe this movie turns 10 in October? Records hasn't been in anything since 2016 so I'm guessing college, since this would be the time to do it; I guess we'll have to wait and see if he decides he wants to be a grown-up actor too. But we'll always have Max. In adjacent news there is a show at the Morgan Library here in New York right now of author and illustrator and personal hero Maurice Sendak's 1970s work for the opera and the ballet; apparently he designed costumes and stages for several shows, something I never knew until now. And their site says there's an opera version of Where the Wild Things Are? Wowza. Anyway I plan on hitting this show up soon so stay tuned to my Instagram.
.
Who? Jason Adams When? 2:05 PM